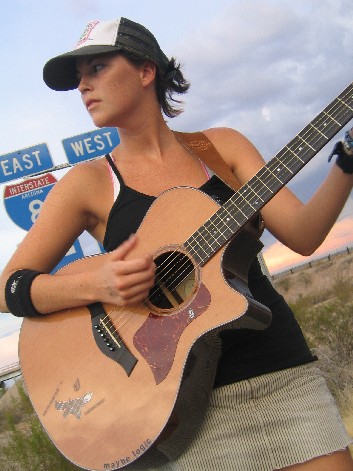 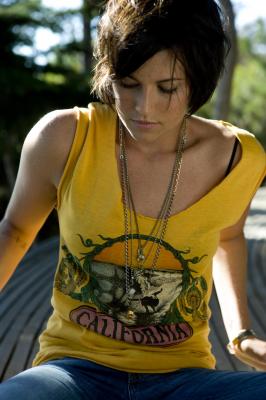 In a previous article, I expressed how much it surprised me to see the likes of Jack Johnson top the charts, with music that is nowhere near mainstream. In my opinion, music desperatly needs this acoustic/folk/soft rock genre to thrive, because it’s quite unique and distinct from what is generally sung today, bringing a much needed breath of fresh air, inspiration, and a fantastic message. Aren’t you tired of a world filled with Britney and N’sync fans (I know they broke up, but they still have fans)?

So as much as I enjoy and support this genre, I found out much to my shame that there’s not much I know about Tristan Prettyman; she’s a singer/songwriter from San Diego, California. She is signed to Virgin Records and her first record came back way in 2005. I listened to it and it’s quite good, but I hadn’t heard about it at the time.

Now, she released a follow up named ‘Hello‘, in which she clearly shows the fact that she has evolved musically since her first release. In fact, when I heard only the instrumental part before she was singing, I could have sworn it was good old Jack playing. Actually, she has a lot of things in common with him; she took surfing as an elective at her junior high at the age of 12, she writer her own stuff and uses creative and overall great picking patterns to lighten up the chords and she has the same type of attitude.

Also she’s involved in environmental projects and she drives a Toyota Highlander Hybrid. About the music now, it’s about her; it reflects her feelings, her wishes, her fears. It’s not quite as mellow, peaceful and ironically subtle as JJ is, the attitude is a bit more rebellious, but the effect is pretty much the same. Nice tunes, still has a lot of unexplored potential but she’s on the right track, and people love her for numerous reasons. Probably one of these reasons is the fact that she remains very actively involved in consistently updating her official MySpace profile and blog with stories from the road. Great singer and seems to be a great person too. Keep an eye out for her, we’ll be hearing from here more and more as time passes. Here’s a sample:
>>Stream: Tristan Prettyman – ‘Hello’