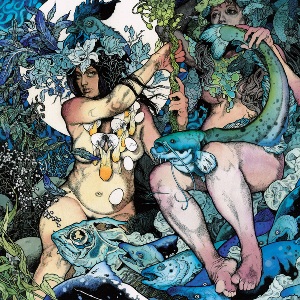 Red and blue are  interesting colors. They are two of the three “addictive primary colors,” the third being green. Red, generally signifying anger in modern culture, is assuredly addictive in American society: road rage, “You lie!,” talk radio, you get it. It would make sense, then, that Savannah quartet Baroness would name an album steeped in ire Red Album. It would also make sense that its follow up would be titled Blue Record, a color of depression and sadness, surely another addictive emotion in our culture.

It’s easy for a metal band to take its sound further and further with each record, getting more technical, louder, angrier, whatever. It takes a lotta balls, though, to be a metal band and scale your sound back. Baroness, a band possessing a better sense of humor than any band in metal (aside from anything including Devin Townsend, of course), wears its humor on its sleeve: the name, the album titles, etc. Yet, the biggest irony of all regarding Baroness is that it has bigger cojones than most bands in any genre considering its name.

Perhaps to suggest that this a (slightly) lighter affair, Baroness named this album after a much more passive color than its predecessor. In terms of its overall mood, certainly this is true. It’s not as angry as Red Album, to be sure. But, fear not, this does not mean that Blue isn’t heavy or loud. It’s both – just subdued, contemplative, the resulting wake left from seeing, well, red. After the rage comes the calm. Hell, another disc as furious as the last would have caused Baroness to explode. We wouldn’t want that. The wordless interludes like “Ogeechee Hymnal” and “Blackpowder Orchard” – the former being a a medieval-influenced, carefully stomping elephant, and the latter being a playful butterfly – display serious meditation over the psychotic rampage released two years ago. It seems that Blue is all about considering the next step as you stand over the body laying in a pool of blood, holding the knife in your shaking hand. The whole record screams “I’m lost.” That is, the album is focused in terms of songwriting, but there’s an ambiance of being severely adrift throughout. Atmosphere is unequivocally the thing most needed in modern metal and undeniably the thing that Baroness does better than any other American metal band.

You might even say that the main riff for “Swollen and Halo” is…uplifting. I know, it’s weird. The rhythm section of drummer Allen Blickle and bassist Summer Welch help the song to…bounce around. Again, I know it’s weird. Even weirder: it works. Quite well, actually. It’s still a Baroness song, meaning it’s heavy as shit. But it’s also spacy and animated. The last third of the song features a guitar duel between John Baizley and Pete Adams. It’s simply marvelous. Then there’s “O’er Hell and Hide,” a four-minute bouncy, whimsical instrumental romp demonstrating that Baroness can pretty much do anything it damn well pleases at this point and make it work. Finally, “War, Wisdom and Rhyme,” a track that, despite its name, finds the band – dare I say it? – having fun. To wit, the song builds to a stunningly gleeful climax of twin noodling guitars.

Even Baizley sounds a tad, um, subdued with his vocal delivery. There’s still a grating nature to his shout-singing, but on Blue he seems to have mellowed out to match the music. He’s like the metal version of Bono here. His voice can actually soar. Witness “A Horse Called Golgotha,” a track containing an anthemic chorus rivaling most U2  songs. As both Baizley and Adams both howl “The stained horizon/ Ablaze with revolvers/ Stampedes and bridles” together, it sounds as if they’re trying to shout down a tornado. It’s easily one of the most magnificent moments in all of 2009.

Restraint of one’s feelings, especially anger, is perhaps the most difficult action of mankind. This has never been truer than in the realm of metal, a place where bands are measured by their ferocity as much as songwriting, if not more. Which is unfortunate because actual songwriting is what makes great metal just that: great. Any band can just step into a studio and play the most technical riff, the complex polyrhythm, or have the most abrasive scream. Yet, it’s the bands that write genuine songs that seem to matter the most and most clearly stand out. Baroness, thankfully once again, falls into the latter categorization with Blue Record. The boys from Georgia have proven an enduring fact once more: you don’t have to be the most extreme to be the most relevant.