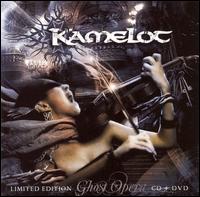 Until about ten years ago, metal meant just hardcore instrumental and fast guitar playing. Mostly, it is the same today, but some changes in the genre delivered albums which in the early ’90s would just not be possible.

A thing which probably nobody could have predicted is for a band to merge heavy metal with a symphony orchestra. Today “[tag]symphonic metal[/tag]” bands seemed to be growing by the day — as the genre was being spearheaded by such acts as [tag]Kamelot[/tag] (with most of symphonic metal bands hailing from Europe, Kamelot is an exception — they’re natives of Florida). Most such acts sound good but they just do not bring anything new. Kamelot does bring something new, just maybe not so much as we would expect.

Almost every track is a living testament to their ability as musicians and they sure play. That is why this bonus DVD was released; the album itself would be ok but it includes a bonus DVD featuring a video of the album’s title track as well as a “making of” video. It puts together those bits and pieces which show you why Kamelot is a great and underapreciated band with even more potential than they already show. Describing it is not possible. It has to be listened because it is more than music. It is pure emotion so listen to it.