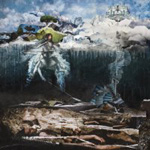 If you’ve listened to any of his solo work, you know that it’s got little to do with what he’s doing with the Red Hot Chili Peppers. Still, this is by far the most different style he’s ever gone for, and it suits him like a charm. It’s a mix between psychedelic rock and folk (yeah, really) and it has to be said, it’s really wicked. Prepare yourself for trippy experience, where wicked guitar solos blend with moments of absolute peace and silence, and where you never know what you’re going to get next; you only know this: John Frusciante delivers. This album clearly shows his very wide vocal range and his even better guitar skills, but don’t get fooled, this is by no means a guitar album. It seems like Cat Stevens on acid to me, but perhaps rock fans will be a bit disappointed by his mellow approach.

The Empyrean starts off with “Before The Beginning”, a chill out instrumental tune with a dazzling display of guitar effects and unique songwriting. This is perhaps the only tune where the emphasis is on the guitar work, being somewhere between a very calm Jimi Hendrix and David Gilmour. It’s the best choice for an opener, setting the mood for the following songs and getting you used to the vibe. “Song To The Siren” is a great choice for a title, representing the tune exactly. His voice seems to be somewhere far away, sailing on distant seas, yet you can hear it so clearly. “Unreachable” is perhaps the most accessible song here, making it the probable candidate for a single, but still, don’t think RHCP. It still sounds very funky even by their standards. “God” and “Dark Light” don’t bring anything new musically, the first being perhaps the only resemblance with the Red Hot Chili Peppers, while the second is weird, in a laid back kinda way, but the lyrics show his talent, pointing to the true depths of The Empyrean.

When you get to “Heaven”, it seems a bit redundant, but then you get the loud vocals, it’s a whole new dimension. Enough of me is performed with Johnny Marr, and it’s definitely one wicked ride. For one thing, the solo seems to be a jam session by a very talented and very drunk guitarist, but I’m guessing that’s how they wanted the tune to be. “Oh yom” is another Cat Stevens resemblance, and it just may be the best song here.

The Empyrean will definitely please Frusciante’s old fans, but the real question here is if it will gather new ones. Well, I think so; but he’s not going to rock the place at MTV, because mainstream is not his target, and he’ll just get some of the listeners who go for more experimental things. It’s pretty hard to digest, and the producing adds to the trippiness (is this really a word?) of the ride, so if you’re not interested in moody and experimental, you probably shouldn’t buy this. But if you find pleasure in original songwriting, unique blending of musical qualities and you’ve loved his previous work, this inspired creation is definitely the thing for you. If you’re not convinced yet about what this is (because that is, really hard to do) perhaps you should read what he said about the album:

The Empyrean is a story that has no action in the physical world. It all takes place in one persons mind throughout his life. The only other character is someone who does not live in the physical world but is inside it, in the sense that he exists in peoples minds. The mind is the only place that anything can be truly said to exist. The outside world is only known to us as it appears within us by the testament of our senses. The imagination is the most real world that we know because we each know it first hand. Seeing our ideas take form is like being able to see the sun come into being. We have no equivelent to the purity of that in our account of the outside world. The outer world appears to each of us as one thing and it is always also a multitude of others. Inside to outside and outside to inside are neverending. Trying and giving up are a form of breathing.

Still, I’m not yet convinced if it’s his actual metaphysic experience and his belief of the world, of if his previous drug experience has had a biggeer impact on him and we’re dealing with a younger Keith Richards.