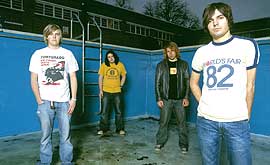 It’s really amazing to see one of this bands, that without any backing up and without “star flatulations” come out and basically beat the shit out of almost every other band out there, digitally speaking.

The unsigned band recently released their debut album, ‘Union’, is currently at number four on the iTunes chart in the UK and even better, they top the US iTunes Alternative countdown. Pretty good for guys that pay for everything they need themselves, right??

“This was a completely independent release and with no label backing, no finance, no radio play and no press coverage. I think it’s a real indication that it is now entirely possible to get this level of success without a major label behind you.”

As if we needed another clue to figure that one out; still, it seems some still haven’t.

Despite the digital havoc they’re reigning in the digital charts, they can’t be eligible for the UK or other charts, because well, their music hasn’t been released on an actual CD. This is perhaps one of those ‘we should bend the rules moments’. Anyway, here’s just a taste of what they do; go to iTunes and secure their domination even more, or something.