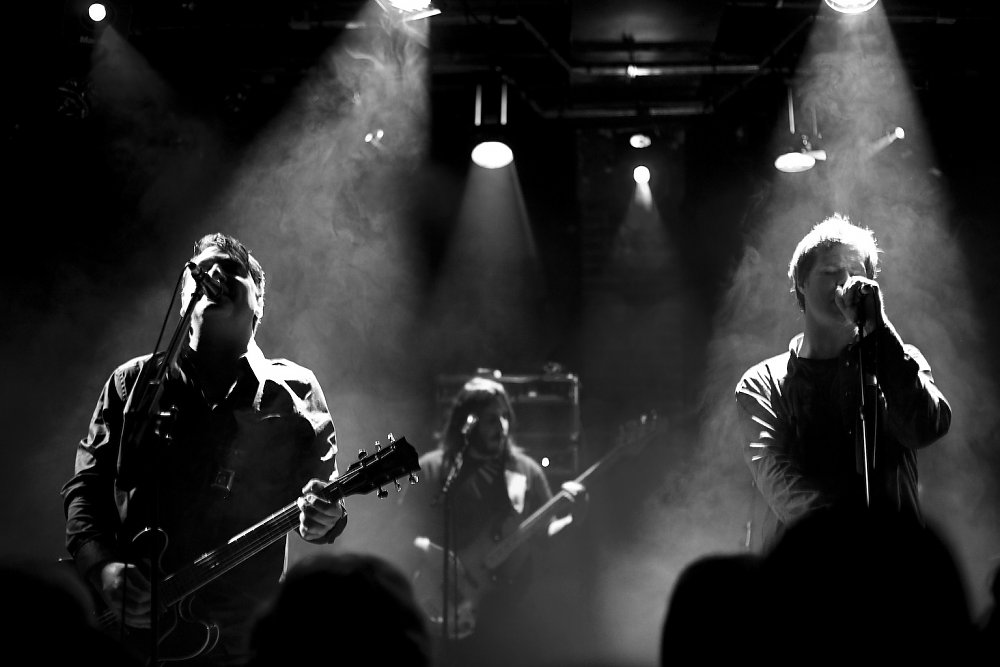 Photo credit: Rockscope. Sadly, no cameras were allowed at the gig.

For the uninitiated, The Gutter Twins are none other than Mr Mark Lanegan (former Screaming Trees frontman and mainstay of Queens of the Stone Age) and Greg Dulli, from the slightly lesser known but equally brilliant 1990s outfit The Afghan Whigs. Under the guise of the Gutter Twins, Lanegan and Dulli have collaborated to produce a sound unlike their previous bodies of work, respectively. Last year’s amazing debut Saturnalia saw the duo plunge the depths and re-emerge to tell the tale. The download-only 8 Track EP Adorata followed, continuing where its predecessor left off. Currently on the European leg of their tour, the Twins first treated Irish audiences to a taste of their distinctive blend of rock last April, in a phenomenal performance in Dublin’s Ambassador. This time around, in a sold out intimate slot in The Academy, the pair reached the highs of their Irish debut last year and much more beyond.

Kicking off in style with a trio of Saturnalia‘s best tracks – firstly “The Body”, followed by a lively rendition of “All God’s Children” and “The Stations”, the tone was suitably set for an evening of raw acoustic rock. Backed solely by Dave Rosser on acoustic guitar, Lanegan and Dulli’s harmonies easily infiltrated the hushed silence of this personal setting. Tonight’s show comprised of a look back on the Sub Pop careers of both performers, and included a surprise version of the haunting “Sunrise” from Lanegan’s sophomore release Whiskey for the Holy Ghost.  Another Lanegan solo effort “Kimiko’s Dream House” was performed to perfection, sounding even more heartfelt in this kind of setting. Another high point was the beautiful “Creeping Coast Line of Lights” which showcased Lanegan’s vocals as one of the best voices of modern music. The influences of blues, country and gospel on both musicians came through, particularly in the raw version of “Resurrection Song” and the cover of Bukka White’s “I Am in a Heavenly Way”. Onstage banter was kept to a minimum, as is usually the case with Lanegan gigs and on this occasion, both performers appeared quite stand offish. In fact, bar the brief moment when Dulli joked about kissing his vocal partner, it could be said that both clearly wanted to get the show over with.

Aesthetically, Dulli and Lanegan may not resemble the poster boys of rock – both are middle aged and reflect the toll of a rock n roll lifestyle of addiction.  In a climate where our rockstars are airbrushed within an inch of their lives, the sheer talent of this pairing, combined with their rough around the edges allure, The Gutter Twins are a welcome breath of fresh air as the focus is entirely on the music (as it should be!).

Tonight’s Evening with The Gutter Twins was wrapped up with a breathtaking “One Hundred Days” and finished off with an unlikely take on the Everly Brothers classic, “All I Have to Do Is Dream” with both vocal styles overlapping and blending together effortlessly. Unfortunately the show finished much too early, after around 80 minutes and just after things had really started to take off. Yet despite the lights going up far too soon and the notable presence of just one Afghan Whigs cover, tonight’s performance solidified the reputation of Lanegan and Dulli as exceptional musicians in their own right and as much more than survivors of grunge.