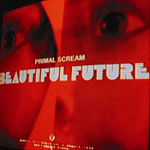 Shock. The initial feeling that engulfed my body after I had sat and listened to the new Primal Scream album, “Beautiful Future“. Shock because I felt as though the old Primal Scream that I knew and loved, had been replaced with new, melodic and calm impostors. Again I stress this was my initial feeling. After listening to the album again however, I realised that the members of Primal Scream had not been replaced, but merely that they had grown up.

The music wasn’t challenging and did not resurace my desire to drink ludicrous amounts of alcohol, whilst singing to every song that boomed out onto the dance floor. Then I realised, this isn’t what they are trying to do. They are not trying to get us dancing around half naked they are simply trying to make us listen. Old men they may not be, but Primal Scream are not in the good old days of taking drugs and writing music that we can rave to. They are older, wiser and are more likely to be at home with their kids then at a club, off their faces on E. Their latest album proves this. Most tracks on this album are like a smackhead after their last hit. Emotionless. They cant render an ounce of feeling and songs such as Suicide Bomb and Over and Over don’t uplift or depress you, in fact they do nothing but be there. I did say most of the songs however, for a reason.

Can’t Go Back and Necro Hex Blues are random additions to the album that feel quite out of place. Guitar riffs a plenty and with Josh Homme making a welcome appearance to an album that seemed doomed to be sensible, these two songs transform the album into a complete collection of erratic thoughts and feelings, making you wonder if you do in fact like this album. Another out of place tune is the Glory of Love. We are treated with two versions of the song both extremely similar, but with the superior being the single version. A song that actually rose some emotion to the surface. A obscure feeling of joy suddenly arose in me, one that had not yet been present whilst listening to this album and a feeling that reminded me to smile today and be happy tomorrow.

Screamadelica this isn’t. There is no song comparable to Loaded or Miss Lucifer and hardcore Primal Scream fans may not like the new direction the band has taken. I agree the album isn’t amazing, with only a few tracks grabbing my attention, yet I still cant decide whether I like it or not. I like the feeling of numbness when listening to songs such as Beautiful Future but I don’t like the utter uselessness of Zombie Man, a song that makes me want to hurl the CD at Bobby Gillespie’s head.

Noone can doubt Primal Scream’s ability to reinvent themselves and once again they have produced an album that is a far cry from before. To me Primal Scream are like schizophrenic patients. Totally unpredictable. One personality one track and another the next. If Xtrmntr is Mr Hyde then Beautiful Future is defiantly Dr Jekyll. Now all you have to do is choose which one you want to be stuck in a room with.

View all articles by Emma Quinlan