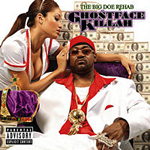 In little more than a year [tag]Ghostface Killah[/tag] has propelled himself to be seen as the most flashy and popular member of the [tag]Wu Tang Clan[/tag]. From putting out an album almost every year – just recently he put out two in one year – to having his own segment on MTV 2, Ghost is arguably carrying the Wu on his back. But why? The reason is simply because of his ability to constantly put out good material. Whereas pretty much every member have seen a decline in their material, Ghost has a constant flow of good music and this does not change in his new album Big Doe Rehab.

Lyrically, Ghost is simply memorizing as through out this album he easily displays his versatility. Whether he’s spitting grimy on “Toney Sigel A.K.A. the Barrel Brothers”, with Beanie Sigel, and Styles P – who both kill this track making it one of the best on the album – or painting a story with his words alongside the equally linguistic Raekwon, and Method Man on “Yolanda’s House”, Ghost shows he has yet to show any sings of “lyrical aging”. His flowing ability is best show on the funky “Supa GFK”. Ghost bounces around the “Superman Lover” sample with ease as his energetic voice compliments the laid back beat. A surprising stand out though is a song that Ghost isn’t even on. “The Prayer”, a sort of interlude, has Ox singing a cappella as he completely blows you away with airy but powerful voice. Seemingly putting his heart in the minute and a half track he pushes this to be one of the best tracks on the album.

On the production side this is standard Ghost. Jazzy and soulful production aligned with gritty, street beats for Ghost to kill. Tracks like “I’ll Die for You”, has Ghost putting his thoughts on the table over a soulful yet gutter beat, while “Killa Lipstick” has a funky and jazzy feel, as Meth gives one of the smoothest hooks I’ve heard in a while. The stand out though is the ending track which is the highlight of the album. Chrisette Michele – she’s on fire right now – delivers another classic song as she sets up Ghost for his most versatile and comfortable verses on the album. The sharp snares, the hard bass, and the way the beat switches up whenever Chrisette Michele’s voice is heard makes this the best track on the album and probably one of the best songs of Syience’s career.

The dark side of this album though comes in the massive amount of features. Out of the 16 tracks – excluding the skits which would make it 13 – there are only 5 with Ghost by himself or with a singer. While this is not bad considering who is featured – Method Man, Beanie Sigel, Styles P, Raekown, ect, – it would have been nice to hear more Ghostface and less everyone else, especially when the Theodore Unit is involed. A glaring example is on the track “Paisley Darts”. This track would have been a lot better without the help of the repetitive, lackluster, and punch line heavy verses of Trife da God, and Sun God.

Problems aside at the end of the day this is another solid effort from Ghost. Although this probably wont go down as one of Ghost best albums – lyrically, or production wise – it will be a staple of his ability to put out great albums, and is a must have for any Ghost fan.