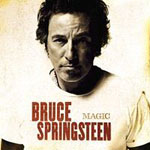 It’s been 5 years since we’ve heard anything new from [tag]Bruce Springsteen[/tag] and the E Street Band, whom back then reunited for the first time in 20 years and made a 9/11 tribute album The Rising, condemning the devastating attacks. It was a huge success, the triumphant return of The Boss, as it was called and so it was expected that under the same formula as The Rising, Magic would walk in it’s footsteps. It does more then that, as the name implies, it’s a magical record.

The explosive and exuberant opener “Radio Nowhere” is just the tip of the iceberg, one of Bruce’s greatest gems. The track’s actually a reminiscence to The Boss’s earlier work, in the late ’70s, early ’80s, a time when Born to Run and Born in the U.S.A. monopolized the radio waves and Magic does well to reflect that, with a twist however. The classic Bruce Springsteen elements are all here, pop hooks, catchy guitar riffs, the robust Clarence Clemon sax sound, elaborate lyrics, but all under a modern vibe, so it doesn’t sound any bit repetitive.

As a parenthesis, I think it’s worth mentioning the fantastic effort producer Brenden ‘O Brien (who’s worked before with The Boss on The Rising) has put in Bruce’s new record. I rarely listen to such brilliantly, clean produced albums such as the Brien has mastered. All of the 10 tracks (11 if you count the bonus track) were all written in the classic Springsteen manner, all meant to sound as live songs, again the excellent production ensures the listener is transposed and feels the energy of a Bruce Springsteen live gig.

There’s no doubt about it, Magic is one of the most catchiest and sticky albums of 2007. “Livin’ In The Future” is one of the record’s highlights, a re-invented “Tenth Avenue Freeze-Out”. This isn’t the only old Springsteen classics look alike on Magic, there’s “I Wanna Marry You” which resurrects “Girls in Their Summer Clothes,” and “Long Walk Home” which somewhat reminds me of “My Hometown.”

The center position of Magic is occupied by “Gypsy Biker,” a very sober and solemn track, telling the story of a veteran soldier returning home in a coffin and the lives of those left behind. “Last to Die” is a stormy track, reflecting thoughts on a nations predicament; this is where Bruce is at his best lyrically (“Who’ll be the last to die for our mistake / The wise men all were fools / What to do?”). The title track, “Magic,” does well in summing what the whole album is all about, it’s a extended metaphor of self pondered existential question that will never be answered; mystery and shallowness.

It’s incredible how Springsteen, aged 58, can still rock our world beyond belief; few artists succeed in building compilations as good as his latest record, and this is his 15th… Magic is a testament to Bruce Springsteen’s young and creative spirit, a solid album packed with the stories of one man’s view over life.