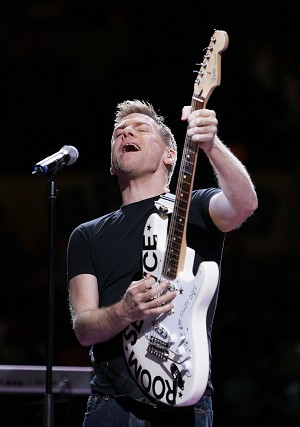 As some of you know, Bryan Adams is set to return with ‘11‘, an album which consists of 11 songs (go figure). The bad thing is that it didn’t came out in 11 November, but the good thing is that it’s going to be released sooner than 2011.

But it was finished since August, so why didn’t we get it? Well frankly, because the record labels are nowhere near dead as some sugges; they are just receiving their first blows, but they still stand.

“It was ready in August and it was basically done in September,” Adams says while nursing a tea inside a Toronto hotel room in late February. “The record company in Europe didn’t want it to come out until March so we had to sit on it. You can imagine my frustration.”

It’s not going to be an acoustic record, as was initially planed, but it has numerous hooks (from what I’ve heard at least) and radio-friendly ballads, as well as tunes which are definetly not mainstream.

“I was on tour and I think there was an acoustic artist opening up this festival that we were doing,” Adams says. “I was watching them play and I thought to myself, ‘I can’t imagine myself doing that.’ “

Supporting this album, he went on a tour: an 11-day, 11-city European tour of 11 acoustic shows. He plans on doing the same thing in America, but nothing certain has been announced. He also gives a word out to artists trying to get noticed today, complaining they can’t make themselves noticed although they play good music:

“When I started it was ultra-hard,” he says. “In some ways it’s kind of easier today because there are more avenues to create some sort of image for yourself. Back in 1979, you were stuck with an 8×10 photograph and a demo tape on a cassette and prayed that the cassette didn’t sound like sh–t. Otherwise, that was the end of your hope. And there’s a lot of knocking on doors. It’s very difficult to get to know the guy who knows the guy who knows the guy. So if you’re no one, like when I started out, no one, how do you get through these systems?”

Think about that for a while, myspace stars.