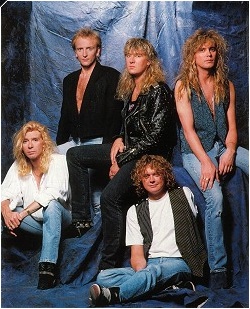 Def Leppard has set a March 18 tentative U.S. release date (one day earlier internationally) for its new album, entitled “Songs from the Sparkle Lounge”. If things work out then it will be the first release since “Yeah!”, which was a collection of covers of songs by artists who had influenced the band.

In fact their latest original release is 2002’s “X”. The first single is a song called “Nine Lives”, which features a guest appearance by country star Tim McGraw.

Also, they are involved in some projects which include touring with Styx and Reo Speedwagon in North America. The trek will consist of around 20 dates. They are also going to sing two shows in India and they will team up with Whitesnake for a UK co-headlining tour in June.