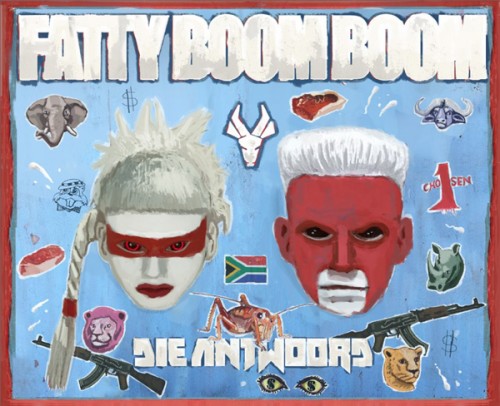 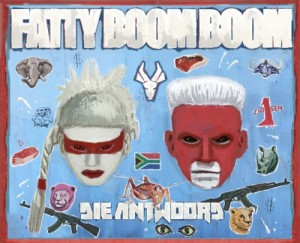 It’s about time something like this happened. She really thinks that she can wear something like a dress made entirely of meat, and then show off with her new little doggy and act like a really peaceful and caring person.

I don’t think that the guys from the rap/rave band Die Antwoord  had that in mind when created the video for their song: Fatty Boom Boom, but obviously something bothered them about Lady Gaga that made them wanna lampoon her.

In the Antwoord’s music video,  a man appears dressed in Lady Gaga’s  well known outfit – the meat dress- acting like a spoiled brat in a big car with two “gorillas” in the back seat, taking a tour somewhere in South Africa, where the people on the street are rallied. After a short tour and the presentation of some animals as hyenas and lions on the street, a gang shows up and attacks them, the man dressed as Gaga runs away and arrives at a dentist and gynaechologist cabinet, where the doctor extracts from her lady parts a little ugly bug. By the end of the video, Lady Gaga ends up eaten by a Lion on the street.

The hilarious fact about this event it’s not the video, the song or something in this area, but Lady Gaga’s reaction on her twitter page:

i fink u freaky but you don’t have a hit. hundred thousand tIckets sold in SA.

And after that Die Antwoord replied:

lady… even tho u r ‘larger’ than us… we still cooler than u… plus we don’t have prawns in our private.

Although funny, this looks like a 3 year old argue to me. Enjoy the video that scandalizes Lady Gaga and her fans!