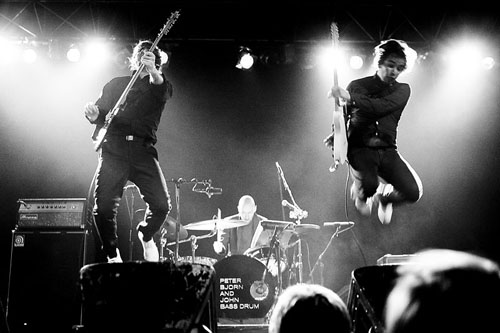 There’s always something about Nordic indie music that makes it special, it’s really like nothing else. The band there have a unique approach to how they play their music, successfully blending electronic elements with rock amalgams. A perfect example is the Swedish power trio Peter Bjorn and John, a pragmatic band that’s managed to make a name for themselves in the international indie scene thanks to their wild, reinvigorating live shows and  typical Stockholm sound. Their forth studio effort, “Seaside Rock“, a mostly instrumental record, is set to get released sometime in late September. It will be really difficult for the band to satisfy a now pretentious fan base, especially after releasing such a marvelous album in the form of the 2006 “Writer’s Block.” Still, I have faith that Peter Bjorn and John are gonna deliver tenfold. Bellow you can download “Inland Empire,” one of the best tracks off Seaside rock, out September 23. [thanks to Vague Space for the mp3]