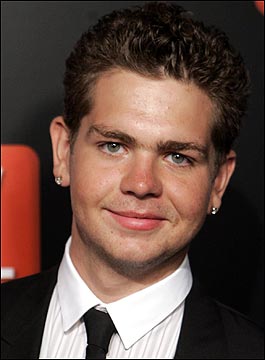 Believe it or not, this is Jack Osbourne. Quite the makeover...

Jack Osbourne came into the spotlight once with the highly popular TV reality series The Osbournes, that followed the entires Osbournes family through their daily lives. Surprisingly or not, the show really caught on the public ran on for four straight seasons. However, according to Jack Osbourne, Ozzy’s son, the show has really hurt his father reputation depicting him as a lazy, senile and more or less stupid old man, which is not really the case, at least according to him.

What Jack hopes to do to solve the issue is by gathering some old friends and colleagues of his father, get them all together and shoot a documentary. According to Jack, Ozzy, well known to be a severe dyslexic, “refuses to do a book, so this is more like a talking book, a really thorough autobiography.” Filming has already started back in January featuring interviews with all the primary members of Black Sabbath, various members of Ozzy’s consistently changing solo band lineup and other metal personalities, however the biggest problem Jack is facing is sincerity from their behalf.

“The hard thing is getting people to be honest and not have it be a fluff piece, because that’s not what we’re trying to do,” he said. “I’m trying to paint a realistic picture of who my father is. I think The Osbournes, to a degree, tarnished the public’s perception of my dad as a bit of a senile, funny, bumbling guy. Yeah, my dad can be that guy, but it’s not him. I think that almost discredited who he is as an artist. My dad’s not an idiot — he’s nothing short of a genius, in my opinion. He does have huge flaws, and we’re trying to really paint an honest picture of that.”

The film’s production schedule is open-ended, and Jack hopes to be able to preview segments at next year’s Ozzfest — in whichever incarnation Ozzfest appears.

“Next year at Ozzfest we’re talking about doing a traveling museum,” he said. “It’s something we were talking about after the show, having a museum at the gig where fans can go in and look at old photos and old memorabilia, and at the end of it, it would have a five-minute clip of the doc just to start to get it out there. I think it’s very dependent on what other tours are going out next summer. I think because of the success of the Texas show, it’s almost like, ‘Why bother doing a massive tour again?’”

As a big Black Sabbath fan, I hope Ozzy is given the true honors and respect he truly deserves, as an incredible lyricist, singer and innovator. Go, go, Jack!