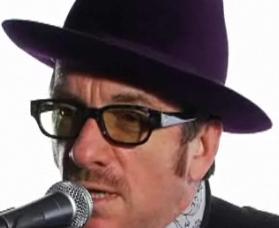 The constantly energetic Elvis Costello will be expanding his respectable catalog next week with yet another album, titled “The Secret, The Profane, and the Sugarcane.” Recently he paid a visit to Newsweek‘s Pop Vox music session, where he played his latest single “Sulphur to Sugarcane,” a moving southern anthem. That’s not all though, besides playing his song, Elvis also discussed a bit about contemporary country music, Stevie Wonder and, inevitably, digital music.

Being a ferm supporter of the vynil, Costello didn’t miss the chance to take the piss a bit on today’s record industry, entirely dominated by digital retailers. And he’s very much right to complain.

[There is] literal piracy that everybody bangs on about, and the massive profiteering of the legitimate download sites who don’t pay proper royalties, who release half albums and don’t annotate them properly. They don’t offer the purchaser either artwork of coherence or, more importantly, music of sonic coherence. They’re offering it in such a heavily compressed rendition that you might as well be listening to it on a detuned radio in the other room. So congratulations, Mr. Jobs: It’s a genius move on your part to make the iPod.

A world without iPods… hmmm. Now that’s a crazy thought!

Costello’s The Secret, The Profane, and the Sugarcane will be out June 2nd, 09.