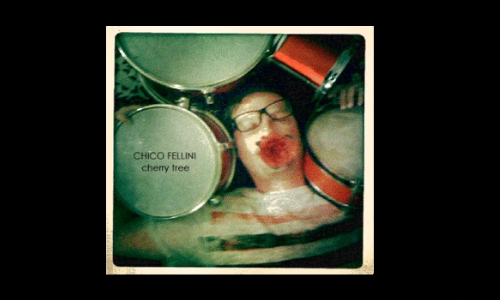 A word, if you will. A little bit ago, I bellowed news of Chico Fellini’s “Single Series”, which has since thoroughly lived up to its remit of being a series of singles. The latest in this series is this: “Cherry Tree”, the cover art for which so disturbingly inhabits the top of this post. It’s embedded below the cut, along with some thoughts and words and stuff. Also, we totally need to interview Chico Fellini. If only for the headline “Third Degree: Fellini”.

And now this happens:

I quite like this. While I wasn’t all too convinced back in June with “Give It To Me”, the last few singles have been far more tolerable, and this is certainly the best yet. This increase in likeability is possibly down to the incredibly off-putting video that accompanied that first single, but more likely due to the band’s lessening focus on the silly, distracting aesthetics that all these fuzz-indie types seem to embrace with such youthful, carefree abandon these days, and an increased focus on – y’know – the song.

Where “Give It To Me” was busy and overeager, “Cherry Tree” is played with commendable restraint, sounding sort of like Cold War Kids remixed by Dave Sitek, and actually feels shorter than it’s sub-three-minute running time. It’s tidy, but it’s fully-formed, and leaves you wanting more, which means it’s rather tempting to just hit play again. So I do. Good work, that.