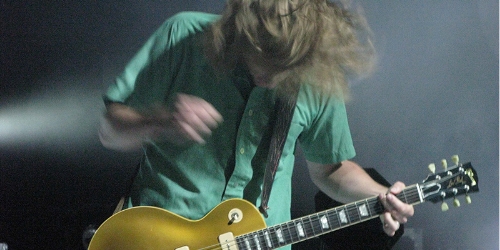 Sticking with the theme of popular rock bands’ guitarists doin’ their own “string” (thing), I notice that My Morning Jacket’s Carl Broemel has emerged from under his floppy fringe, politely brandishing a brand new album, All Birds Say, which is due out at the (wag)tail end of August. Strangely, his website seems to wilfully ignore the existence of Broemel’s previous album, Lose What’s Left, presumably because it was made pre-indie-fame, as opposed to ignoring it because it was rubbish, which it wasn’t. Whatever the reason for the cheerfully determined omission, the new album is certainly being vigorously trumpeted. It’s available for pre-order here in as many as four separate varieties (all of which strangely claim to include an immediate download of the album, meaning the digital version isn’t really a pre-order, so much as it is an order), and the accompanying blurb rather brassily declares this thing:

This is the kind of album that epitomizes the vinyl experience; an instant classic that is sure to stand the test of time.

I’ll admit upfront that I’m a rather enthusiastic fan of MMJ, but that seems – just slightly – hyperbolic. Then again, I haven’t heard the album in full, only a free download of “Heaven Knows”. Which is quite nice, but I’m resolutely unsure of its ability to stand the test of time. Perhaps the other songs are more memorable – I hope so. Anyway, here’s the download.