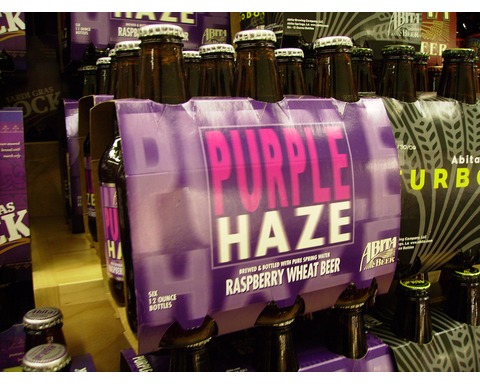 I don’t know about you, but Jimi Hendrix always seemed like a Budweiser man. Hmm… or maybe Heineken? On second thought, judging from his psychedelic shows/times, beer seems like the last thing on his mind. How many Hendrix  fans would try the above blend, though?

And what’s better then chilling on the couch, sipping on a Purple Haze brewski then doing it while watching Jimi Hendrix reality TV? Seems like back in February of 1969, when The Jimi Hendrix Experience played shows at London’s Royal Albert Hall, a crew of cameramen + directors followed around the iconic guitarist for a whole month as he was going round his own business. Stalkers bonanza!

Expect the ‘reality show’ to surface around the time the DVD and CD releases of the Albert Hall concerts get out later this year.