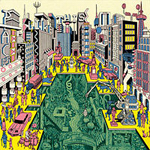 Your favorite Aussie six-piece, [tag]Architecture in Helsinki[/tag], is back with their newest effort “Places Like This“. Three is the magic number, and although they’ve received some nice positive critical reviews for their last two records, I think “Places Like This” may just be the thing they needed to launch them on the mainstream. The fact is, the record, couldn’t have come in a better time, in the mist of the summer, as its tracks are perfectly suited for this time of year. Great feel good vibes, tropical beats and frontman Cameron Bird‘s carefree vocals make “Places Like This” one of leading contenders to the best summer soundtrack.

Hearing the album was mostly planned and written via IM on the internet and recorded in under 12 days, kinda made me think for the worse.If you enjoyed the bands second record “In Case We Die“, a very well received record by fans, critics and me as well , you might find yourself disappointed at first listen, by “Places Like This”. I know i was a bit, something wasn’t right, but i gave it a few repeated listens and it turned to gold, I can assure you it’s a very good LP, you just have to be patient with it. They’ve just went through the natural change a band has to go through, as time passes, it has evolved, still keeping their feelgood and carefree sound, but adopting some electro and sometimes stiff sounds as well, especially steel drum banging.

“Places Like This’ opens up with a ecstatic “Red Turned White”, a track that will cause some ’80 reminiscence for some of you, with clear Level 42 influences. The next track, “Hold Music”, is my personal favorite off the LP, i mostly enjoy the sound mashing, piano, guitar, drums, tuba, trumpet you virtually can’t keep up, together with the intertwine vocals by Cameron Bird and Kellie Sutherland makes this a must listen. The albums first single “Heart It Races” is your typical tropical summer hit, Caribbean like sounds are everywhere, from keys to drums, while Kellie Sutherland’s high-pitched vocals ensure the track is the album’s clear stand out. “Like It or Not” and “Debbie” are mandatory dance songs, they just make your feet go wild, don’t resist it’s useless. “Same Old Innocence” brings “Places Like This” to a epic and respectful end, with great percussions, harmonies and a insanely catchy chorus.

“Place Like This”, at first, starts off with disappointment and confusion, but once you learn this bizarre language within, then all the obnoxious vocals and offbeat “da da da’s” become even more satisfying. Give it a repeated listen and you won’t regret it. Here’s to a sunny summer!