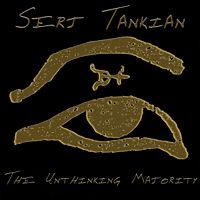 [tag]System Of A Down[/tag] frontman Serj Tankian, today (August 7), has launched his first ever single and likewise video in his solo career, namely the controversial track “The Unthinking Majority“. The single is off Serj’s debut album “Elect the Dead“, due on October 23 and is meant to be an eye opener to the American audience, with lyrics contesting the current administration and war in Iraq ( “I believe that you’re wrong/Insinuating that they hold the bomb/Clearing the way for the oil brigade”).

“The Unthinking Majority’ is a song that I needed to release now, before my record or single comes out, to make a statement about the current catastrophe of our failing democracy. It is unlike any other song on my solo record and meant to inspire collective action”

The video was released on Serj’s website, this Friday, on August 3 and. as the track itself, is meant to build some controversy and discussion around it. Plastic soldiers and vehicles battle it out in a sandbox (Iraq dessert reference most probably), with the tiny soldiers and tanks falling one by one, dying for the oil rigs.