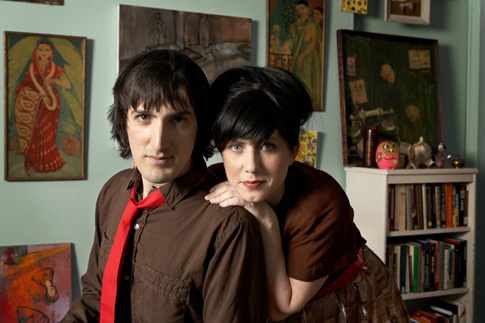 Some would say that love and music, when mixed together, form the most beautiful eclectic expression possible. Brooklyn based duo Courtney Kaiser and Benjamin Cartel, together known as KaiserCartel, can be considered living proof of this. The two met each other in a show, down at the Knitting Factory, where both were scheduled to play on the same bill. Each missed the other’s show, but chatted briefly after. They eventually remained in contact, and after a few months they were playing songs together, with such a ease and honesty in their playing, you’d think they’ve known each other for a lifetime.

Musically, KaiserCartel play a sorta a minimalist nu-folk, dashed with some lo-fi rock and occasionally , on some songs, with synth pop. What’s really impressive about their sound, is their completion. I mean, they’re a two man show, but when a stage they have a certain aura and mantra around them, that makes it feel like there’s a whole 6 man band playing. This is probably because the two use all the acoustic tricks in the book, to make their songs work, everything from snare drum, to cymbal, to double guitar, to whistling (one of their strong points), to the evidently pretty vocals.

All of this can be found on their debut full length album March Forth, on songs like the first single “Okay,” a synth pop anthem of love, or the opening track “Oh No,” a track that shines with love and hope, thanks to Courtney’s warm chorus vocals, as well as Ben’s solid back-ups. Oh, and “Dog Stars,” a song about their favorite movie, White Dove, really hits a warm, fuzzy spot. If they keep this up, I’m sure we’ll be hearing a lot more from KaizerCartel in the independent music scene and beyond.