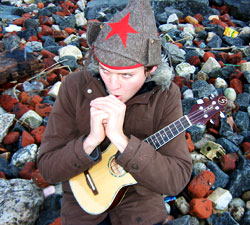 Santa Fe natived [tag]Beirut[/tag], the one man band of Zach Condon, has just released its new website and with it a new track, called “A Sunday Smile” has been put up for download to celebrate this moment. The mp3 is of Zach’s second album The Flying Club Cub, set for October 9, an album that we’re all looking forward too, as it seems very promising. If you didn’t knew who sang it, you might think the song’s off a Emir Kusturica balkan movie soundtrack; surprisingly it sounds pretty good. “All I wanted was the best for our lives” is how the melancholic song debuts, Zach being especially melancholic and sounding really sad, fact amplified by the trumpet. A track more suited for a long nights in your local tavern, then in your indie ipod.