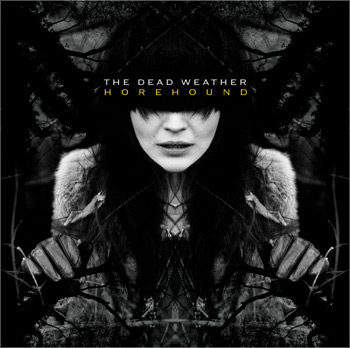 Back in March, the music scene was left a bit numb when a new Jack White side-project was announced, the alt supergroup The Dead Weather – comprised of, obviously, Jack White on drums (this not so obvious), Alison Moshart of The Kills on vocals, Dean Fertita of Queens of the Stone Age on guitar and Jack Lawrence of The Raconteurs on bass guitar. Since then, though, not much has been heard from them, apart from a few exclusive shows in Nashville and NYC’s Bowery Ballroom.

However, the band’s officials have seen fit it’s time to throw a bone or two and a few interesting news have been released. Seems Dead Weather’s debut record, dubbed “Horehound“, will be out July 14 on Jack White’s own Third Man imprint via Warner Bros, while in the UK it will show up a bit early, on the 13th. On the left, you can check out the cover art, depicting lead singer Alison Moshart looking all mysterious, in a cool, non-creepy way.

Moreover, the band has also revealead dates for a massive forthcoming summer North American tour, set to kick off with a few sporadic dates in  Louisville, London, and Paris around June, before really getting into business on July 13th in D.C. Dates and a few Dead Weather live videos from New York’s Bowery Ballroom can be seen bellow.

Dead Weather – Hang You From The Heavens