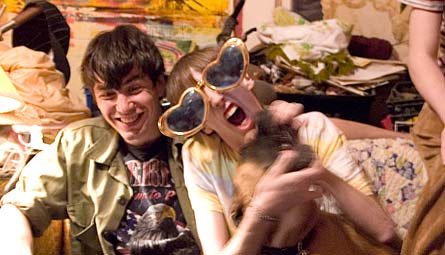 A few days ago it was sadly announced, via the bands MySpace, that their lead guitarist Colin Mee has left the band and that they are now once again a four piece band. Apparently the reasons why Colin left the band were that the tours were a “strain on his schedule” and the what the band “stood for in the media didn’t reflect anything about his tastes or values”. The band have already played a gig Washington DC with out the guitar player, frontman Bradford Cox assuming the role as lead guitarist on his Fender Jazzmaster. Here’s what Colin had to say about the situation in a interview for Pitchfork.

“What happened was that initially I told them that I couldn’t play a couple of shows that we had booked next weekend in Portland and Seattle because it was too much of a strain on my schedule. It wasn’t necessarily my intention to quit.

“Brad basically reacted by saying that if I did that I was giving up my position in the band, which is pretty much what I expected. I told them that I thought the last few shows we did were a little subpar and I figured they could still do the shows without me and get paid or whatever if it wasn’t going to be good even if I was there. I just felt that we had booked too much stuff to support one album just because of the money that was being offered us and whatever networking opportunities went along with that, which I was never involved in.

“By the end of the year we would have toured with basically the same set six or seven times over a two year period, which I would have been fine with, but this particular few weeks was just too much for me considering my other time commitments.

“This sense of being overwhelmed was exacerbated by the fact that I felt we were receiving (and creating) too much press that had nothing to do with any new music being created. I don’t want to be overexposed. I don’t want the world to know what our excrement looks like or what we are selling on eBay or whether we got robbed. I think that it devalues the music and it is just a way to maintain attention when the music should just speak for itself.

“I understand that is not the way the media works but I found it disgraceful and sensationalistic. I felt misrepresented and that the band was being portrayed as opportunists. I was willing to tolerate it, however, but I am not going to put my life on hold for this.”

Deerhunter fans can rest assure, as the band won’t dissolve or anything and their gigs schedule will be unchanged.