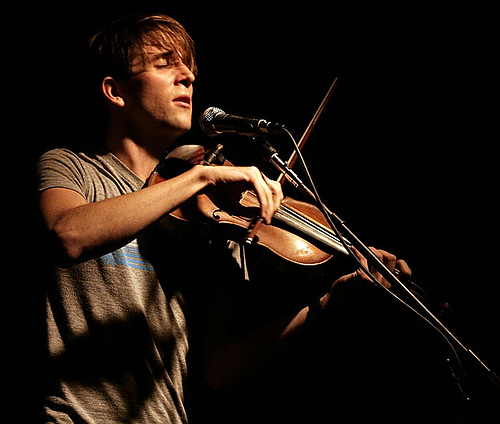 We’ve been waiting for new material from behalf of orchestral experimentalist Owen Pallett, more know by his Final Fantasy moniker, for a very long time, and now, a mere one month away from it’s highly anticipated release, “Heartland” is almost upon us. If you’ve joined him at one of his live gigs from this past summer, you might have been graced enough to listen some of the new tracks off “Heartland”, like this epic performance of “Lewis Takes Off His Shirt” in Ontario. So far, I’ve listened to almost half of the new album, in Youtube/live set quality granted, but even so it sounds fantastically serene – sheer bliss! Recently, we’ve finally gotten our hands on a studio version, namely “Lewis Takes Action” – a very beautifully brass layered track, opened by a slow low-tempo drum set, before Pallett gives way to his tender vocals. It’s one of those songs that you don’ really get at first, but upon repeated listens you start to appreciate it’s intricate and intimate details that make up for a luxurious atmosphere. You can download it for free from Domino Records website, while simultaneously entering a competition to win a signed 7″ of the single. Heartland will be out January 12th via Domino records (in the same month of January expect further releases from the likes of Spoon, Vampire Weekend, Beach House, Editors, OK Go and more) [The Torture Garden]