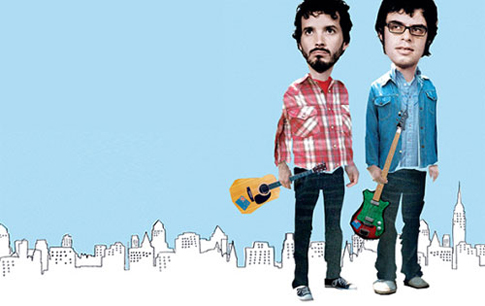 Flight of the Conchords

I was a bit skeptical on the success of the comedy folk duo’s tv show, because at first I found the premise a bit uninteresting and well … downright terrible, involving a foreign rock duo trying to making it big in New York. What a cliche. However I’ve been hooked ever since the show premiered on HBO, thanks to the New Zealanders striking good humor and spontaneity. Actually I think Bret McKenzie and Jemaine Clement may just be geniuses, because they simply bring to the table a refreshing creativity that makes life much more fascinating. Anyway, while I do enjoy HBO, I actually prefer listening to music and returning to the matter at hand, on April 28 Flight of the Conchords (Bret + Jemaine) will release their first full length album, in the form of a self titled release via Sub Pop.

“Business Time” is one of the 15 tracks featured on the upcoming album. And let me say it’s 4 minutes of pure sex! Now this song is simply brilliant, I could help myself laughing though the whole song. Hungry for more. Eagerly awaiting April 28.