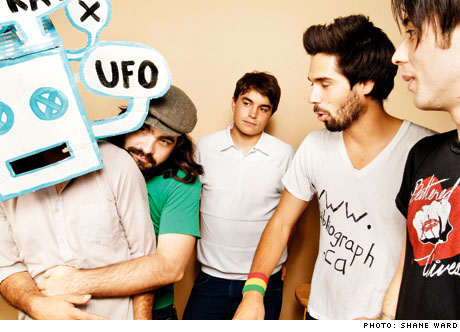 The Montreal based Wolf Parade has always been one of my favorite indie bands, blowing me away right from the start with their extraordinary debut Apologies To The Queen Mary from 2005. Now, just 3 years later, the band is back with their sophomore release, At Mount Zoomer, a more adventurous and exiting attempt then their previous effort.

Both of Wolf Parade’s frontmen Spencer Krug and Dan Boeckner took some time to pursue a few side projects, which helped the two creative forces behind the band to ligthen up, express their intentions that didn’t fit in the band and now better focus on a common goal. Krug was busy last year with [tag]Sunset Rubdown[/tag] (with which he managed to release on of my favorite albums from 2007) [tag]Frog Eyes[/tag] and [tag]Swan Lake[/tag], while Boeckner started [tag]Handsome Furs[/tag] with his fiancée and did a great job with Plague Lake.

Anyway, back to Wolf Parade. Well, I’m something 5 listens in Mount Zoom and I can say it’s wonderful, even though I had my well placed reserves, considering their debut is very hard to match. I don’t if I can dare to go as far as saying it’s better then Apologies, but it’s certainly worth picking up. “Language City” is the song I found the most representative from Mount Zoom, encapsulating the band’s new flow once with its tempo change.