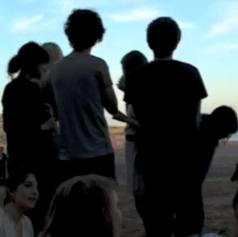 We all understand we’re living in though times with the recession being in full swing and all, but boy is this video low budget. No, I mean really low budget, even for a indie label. I can understand that the producers were going for a spontaneous, fan made-like take on the song, but the end result is really dreadful. It’s just about a bunch of people, let’s call them friends, gathered around the beach, having a lot of fun and thinking about what the future will bring to their mundane lives tomorrow. Yeah, quite the direct approach. This video is so bad, it would it even be worth posting in normal conditions, but the song itself is worth the effort alone. The track was released by the band a few days ago as a free digital download, which you can take home from the link bellow.

[MP3] Los Campesinos! – ‘The Sea Is a Good Place to Think of the Future’

Note to the producers of the video: if you’re on a limited budget, try to tap into the creativity pool. I’ve seen 2441525 fan made videos better than this. Example.