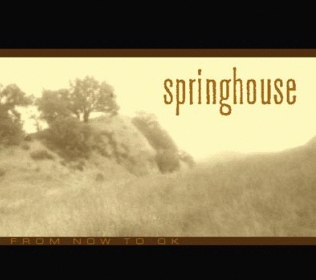 Springhouse has a sound originally perfected decades ago by the likes of The Beach Boys, The Raspberries and Burt Bacharach. In the 80’s-early 90’s bands like Red Kross, XTC, The Posies and Jellyfish returned to the sound of powerpop that they grew up with, each adding their own stamp. One band that you might not have heard of also excelled at powerpop and they’re back after a 15 year hiatus.

Springhouse bridge the Atlantic with their twangy pedal guitar and bright lead tones, clear vocal harmonies and upbeat approach. What really gets into my head is that pedal steel as played by Larry Heinemann, who along with playing guitar and bass and recording From Now To OK, presently is Music Director with Blue Man Group. Heinemann’s slides really bring out something sunny and distinctly American about a sound that has been so huge in England in the past. Big Takeover Editor Jack Rabid plays drums and sings with unadorned loveliness on “Time Runs Out”, joined by sweet horns, strings and sweaty guitar soloing. Mitch Friedland’s vocals are equally wonderful and understated and when the background la la la’s accompany him on “No More Yesterdays” you’ll get that nostalgic lump in your throat. “Mercedes Marxist” is the sound of Springhouse in a menacing mood, Friedland starting out mad, yet soon reaching heavenly vocal heights. The strings swell behind Rabid’s rocking drums and Heinemann’s and Friedland’s angry guitar chugs. This song has a bit of Beatles epicness to it. From Now to OK closes with “Anew”, which sounds like Led Zeppelin’s “That’s the Way” with MBV’s guitar swells behind it, though the acoustic guitar plucking and lovable vocals have their own allure.

You may purchase Springhouse’s fantastic new album From Now to OK at their site and pay what you want for a download or buy the Bruce Licher designed limited release CD plus free download.

I'm 6'7", don't play basketball, thank you, love music, movies, reading and cooking. Queen's News of the World was my first record, the last music I bought was downloads of The Church's Pangaea EP and Coffee Hounds single from iTunes. Visit me at http://myspace.com/swervedriver.

View all articles by BretMiller