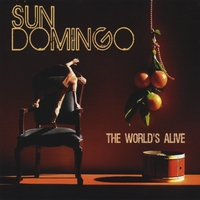 At my former day job we had to hear the same five albums for weeks at a time. One morning, half awake, still in bed a melody swam around in my head. But it wasn’t one of those five albums, or anything else, it was Sun Domingo’s “Hot Little Room”, with its lyric “I’m in love and I don’t want to go home to sleep in my hot little room alone”. The Atlanta, GA band wants to say their music is one thing, but without labeling it, I’d like to say its full of memorable harmonies and melodies, played by talented musicians willing to lay their emotions out for all to hear, to tour the east coast incessantly, to play with bands less inclined to sound unique.

Sun Domingo hearken to bands like Crowded House and The Police, when songcraft wasn’t digitally saved on a computer but was cut and pasted together on tape and played in a room until each song became a singular entity. They’re mainly a soft rocking band, though in a good way, but occasionally Sun Domingo rock out as heard on “Something Face”, where Nathan Lathouse pounds away on drums and Edgel Groves, Jr. grinds away on his heavily distorted guitar. “Ohio Song” is another fun rocker, with cool guitar tones and light touch, Jason Pomar singing of wearing cut-off jeans out to the field, sneaking out to a show. Solid songwriting goes into “Gwlydden” and strong vocals from Pomar, abetted by guitar stabs and uplifting melody. “Happy” is a ballad that will have you crying in your beer as Pomar sings “I could be anything at all, why not happy?” among lilting guitars.

That seems to be Sun Domingo’s goal: to make positive rock’n’roll for all, nothing overwrought or overproduced or sounding like it was ran through Pro-Tools, but heartfelt and intelligent tunes. Sun Domingo are a rare find indeed. Purchase their album The World’s Alive at CDBaby or Amazon.

I'm 6'7", don't play basketball, thank you, love music, movies, reading and cooking. Queen's News of the World was my first record, the last music I bought was downloads of The Church's Pangaea EP and Coffee Hounds single from iTunes. Visit me at http://myspace.com/swervedriver.

View all articles by BretMiller