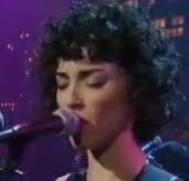 Looking back at 2009, with only a few couple of weeks left in the year, I can now safely say it was a great year for music, and one of the first albums to come to mind justifying just this would be St. Vincent’s “Actor.” It’s serene and crazy, soft and loud, and just about everything in between, allowing for an eclectic experience that should suit almost anyone with an open mind. All of these came to mind when I recently watched some video performances of artists playing at the recent Austin City Limits festival, where I also came across a stunning set by Annie Clark. Right bellow, you can check out her performance of “Marrow”, alongside her backing band, where she simply stole the whole audience. Amazing!

Off St. Vincent’s latest album, Actor, out now on 4AD.