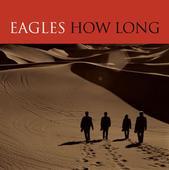 So you’re having your daily stroll with the car, heading to your local Wal-Mart, listening to your favorite radio station, when all of a sudden a strange deja-vu hits you like a punch to the kisser. You stop the car and say to yourself ‘Man this a [tag]Eagles[/tag] song, but I’ve never heard this before’. That’s because this is their first single in 14 years, called ‘How Long’, released all over the air waves and probably airing on a radio station near you as we speak.

Retro is a good word to describe the track, and probably the whole album “The Long Road Out of Eden”, which we warned you about a while back. Joe Walsh’s guitar old-school Nashville chopping, together with Don Henley’s country/blues vocals might have made a smashing hit in the ’70s, but certainly not in 2007. The song’s been written in 1972 by JD Souther, so that would explain the retro sound. Basically it’s a classic Eagles song, if you love the Eagles you’ll love this song, if you hate the Eagles then you’ll hate this song. You can listen to it at the band’s Myspace.