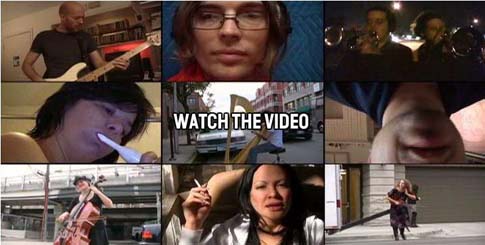 Tim DeLaughter and his  20 something followers, that form the eccentric indie rock orchestra of [tag]The Polyphonic Spree[/tag],  just released the video for their second single “We Crawl,” from last year’s The Fragile Army. What makes the video special is that instead of shooting a conventional video, each of the 23 members were handed a camera and asked to shoot whatever they feel like. Thus hundread of hours of footage was mailed to indie director Dante Harper, who managed to turn it all in a jovial testament to life. You can view the whole video at JamBase.