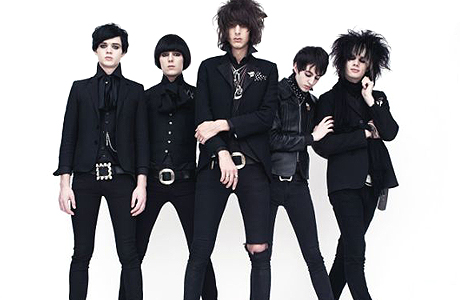 Breakout British group [tag]The Horrors[/tag] and director Marvin Scott Jarrett (Nylon Magazine) are set to attend the 2008 Sundance Film Festival where the documentary film “Counting in Fives,” centered around the band, will be unveiled. The “rockumentary” follows the group through the streets of London and the US, in the studio writing their second record, and throughout concerts in the UK and the US, ultimately exploring how these dynamic personalities came to form The Horrors. The inspirations, the dress, and the explosive live performances of the band are all showcased in the feature. The Horrors are a relative new band, with just a EP and a debut LP under their belt, the later, titled Strange House, made a lot of buzz and attracted critical acclaim since its release last year.

“It’s weird, because when we do gigs we just set out to play our songs and not annoy or wind up anyone – but we often cause loads of trouble in the process”, explains keyboardist Rhys ‘Spider’ Webb evenly. “Still, we’re not interested in pleasing everybody. And we certainly don’t have a problem with pissing people off in the process. We don’t care what people think of us. If we upset people we’re not bothered in the slightest.”

The band will be in Park City, Utah starting Friday, January 18th at the Marquee Lounge, where they will kick off the Sundance Film Festival with a huge bash, sponsored by Hugo Boss. The Horrors will be hosting and DJ’ing with Peaches Geldoff guest DJ’ing as well. You can watch the Counting in Fives trailer bellow: