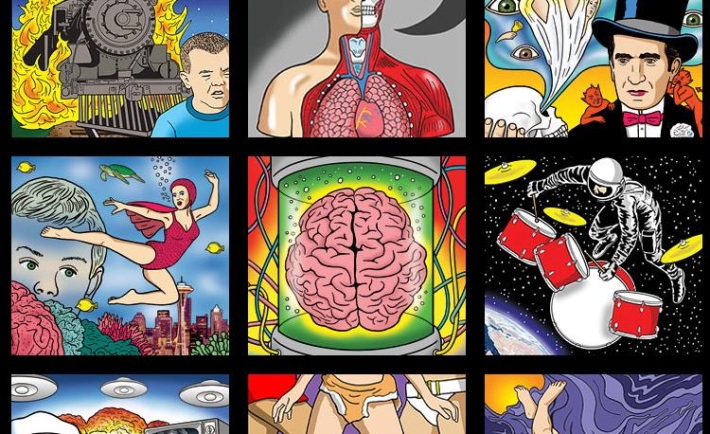 Look, I’m instigating a rule right now, okay? It’s very simple, and it goes like this: anyone who includes in their review of Backspacer – or any Pearl Jam album, for that matter – any allusion to Pearl Jam “getting their mojo back” or “returning to form” are forbidden to write about music for at least twelve years. It’s lazy journalism, and it’s insulting to the band, their fans, and whatever larger readership that writer may have. You see, Pearl Jam never lost their mojo – you just lost touch. Maybe you couldn’t muster up enthusiasm for Eddie Vedder’s increasingly pronounced political musings. Maybe their slow drift from sharp riff-rock into murky, muscular art-rock dulled your interest. Maybe you just found a new band to sink time into. Whatever the reason, don’t accuse Pearl Jam of losing their mojo – 2002’s unfairly-maligned Riot Act was as vital and brilliant as your beaten-up cassette copy of Ten ever was.

All that said, there is a reason why people might mistakenly assume Pearl Jam are getting their groove back with Backspacer – it’s pulsing with nervy energy; it’s tight, concise and to the point, saying everything it needs to say in a short 36 minutes. It’s arguably the most urgent and consciously self-edited Pearl Jam have been since 1994’s Vitalogy. All of that is fair to say. What isn’t fair to say is that they’ve “got their mojo back”.

What they have got back is their producer, their quote-unquote “fifth Beatle”, Brendan O’Brien. It’s an important return – O’Brien was at the helm of the band during their unquestioned heyday, from Vs through to Yield. It’s an important distinction between the band’s punchy, politically-minded self-titled 2006 album and Backspacer – the former was produced by Adam Kasper, and sounded so thin it was less polemic, more bulimic. Backspacer, on the other hand, is a far more personal record, and significantly, a far better sounding album, benefitting immensely from O’Brien’s experienced hand.

And it’s this external input – O’Brien’s willingness to embellish the band’s already anthemic, but notoriously insular, sound with touches of piano or string arrangements – that gives Backspacer a lot of its vitality. It lends songs like “Unthought Known” and “Speed of Sound” a bright, stadium-ready power that you might not expect from Pearl Jam at this point in their career, and takes the band outside the determinedly punky ethos they normally adhere to. The huge choruses of “Amongst The Waves” and “Force of Nature” are given the space they need to take flight, while the darker tones of “Got Some” sound appropriately claustrophobic.

Pearl Jam’s not-so-hidden strength has always been their ballads – Ed’s warm baritone seemingly tailor-made for some heartfelt crooning – and Backspacer continues the tradition in fine form. “The End” (sensibly placed at the end of the record) is a splendidly sensitive piece that climaxes in a startlingly abrupt, impactful fashion, but the real standout is “Just Breathe”. Taking its cue (and indeed, some of its fancy fingerpicking) from Vedder’s Into The Wild soundtrack, it’s a terrifically serene and thoughtful take on the band’s current state – middle-aged, settling down with families, contented, and aware of their serendipitous lot in life. “I’m a lucky man to count on both hands the ones I love” is a wonderfully simple and considered expression of Ed’s happiness, wonderfully counterpointed by the contrast he follows it up with: “Some folks just have one, others they got none”.

But that punk ethos sometimes shines through regardless, and it’s here that the album falters. “Supersonic” sounds like a rejected take of No Code‘s goofy “Mankind”, given a new sheen, but no added worth. Even a fantastic breakdown midway through the song, where Stone Gossard and Mike McCready go head-to-head with some tasty duelling guitars, feels cut-down, artifically shortened, and it fails to save the song from its forgettable fate. Album opener “Gonna See My Friend” is a stronger cut, but once again, fails to be particularly memorable. More worryingly, very noticeable cracks are starting to appear in Ed’s voice. It’s still a formidable weapon at times, but it occasionally sounds like was gargling nettles before entering the studio, so strangled and mangled are his vocals. He belts out some lines with the force and passion of a man half his age; others, he almost croaks.

Also, there’s an odd feeling I get when I listen to the album – it’s missing a certain something that I usually get from a Pearl Jam album. Don’t get me wrong, it’s as recognisably a Pearl Jam album as any of its predecessors, and that’s as reliable a guarantee of quality as anything, but there’s still a je ne sais quoi that I’ve yet to find in this album. Maybe it’ll click after another week, or year, or whatever, but for now, it’s oddly displaced from the rest of the band’s catalogue in my estimation. Not to say it’s worse, or better, than any other Pearl Jam record – it just strikes me as oddly out-of-place next to the likes of Binaural and Riot Act. Maybe it’s a feeling that they were trying a little too hard to make Yield Part II – not that that’s a bad thing to aspire to – or maybe it’s just the lack of McCready guitar heroics, but it’s still slightly disconcerting.

Either way, it’s a great album; a return to a form they never lost in the first place. Don’t let my fanboy neuroses dissuade you from buying it, because they didn’t dissuade me. And I’m dirt cheap.