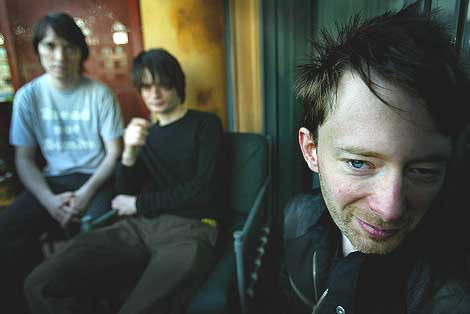 After releasing a set of European tour dates, now [tag]Radiohead[/tag] have sorta/kinda announced some North American locations, but no venues, no dates, just 22 mapped  US and Canadian cities. At least you know where to expect them. Meanwhile In Rainbows sits well on the #1 of the Billboard 200, with 122,00 units sold in it’s second week, after a more weak first week (timing didn’t help).

Radiohead is set to perform the North American tour, in two half-times, one before the Euro tour, scheduled to start on June 6, and the second after Euro leg ends on July 8. Ecology hasn’t been forgotten and the band has, more or less, made this a ‘green tour.’ With this in mind the UK rockers have been joined by the environmentalist group of Best Foot Forward to reduce their carbon emissions on this forthcoming tour. The guys even made a whole detailed report, in which they’ve laid down a lot of figures detailing their CO2 and energy consumption and even posted a article at their official blog Dead Air Space, in which they’ve suggested to the readers to:

Other artists like Jose Gonzalez, have already announced similar green tours and hopefully they’re sure to spark some awarness on the pressing issues facing humanity and Mother Earth. Bellow you can find a list of North American cities, listed alphabetically, that will be graceously enough to host the band: