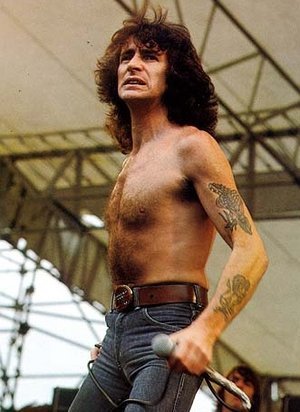 Bon Scott has lived, died, and has been remember as an ultimate rock god; he is the Australian rock and roll icon. His unique voice, energic appearance, great lyrics and overall fantastic charisma made him one of the most loved and cherished people in the world at the time. Unfortnately, he died in February of 1980, after an acute alcohol poisoning.

Some 28 years after that, some of Australia’s finest rock bands (Rose Tattoo, The Angels – known as Angel City in the U.S -, The Screaming Jets, original AC/DC singer Dave Evans and The Party Boys which featured amongst its line-up former AC/DC bassist Mark Evans) got together and played a concert to celebrate him at the Claremont Showgrounds in Perth, Western Australian.

This is more than just a good idea, this is a fantastic iniative but I don’t understand why nobody from outside of Australia got involved; because Bon Scott didn’t influence just in his home land (I’m talking about Australia, although he was in fact born in Scotlant), AC/DC‘s influence around the world is huge; they practically created this genre, called pub rock, which is copied by sooo many bands today and which has influenced more bands than we can count.

Also, they unveiled the bronze Bon Scott stature too which will be housed on Fisherman’s Wharf, Fremantle, the area where the cheeky Scottish born singer spent his early years. 7000 people stood and witnessed how the bands rocked out to their signature songs as well as some classic AC/DC Bon Scott anthems. Wherever he was, you can bet he shed a tear !