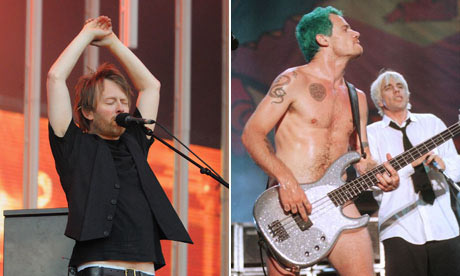 It’s been so far so good for Thom Yorke’s latest project, with two shows in Los Angeles that have earned rave reviews with critics and fans alike. Although with such impressive backup, it was hardly going to be any different.

The idea that Flea’s funky bass stylings would slip neatly under Yorke’s darker sound and esoteric vocal style is not a thought that would have come to many, but the singer’s solo material seems to be the perfect playing field for the Red Hot Chilli Pepper. Thankfully, he has been wearing more than a football sock on stage – a fitting sign of respect.

And last Sunday night, the Orpheum in central L.A. was electrified this dream the five-piece, with new renditions of Yorke’s Eraser compositions – Flea adding a human twist to the electronic bass lines. Of course, this factor of acoustifying the electric gave the songs an entirely new dimension, and has been reported to have been reminiscent of the sounds coming out the early 90’s rave scene in the UK. Flea took centre stage for Skip Divided, this time adding a tasteful tune on the melodica. Two Radiohead songs in the making, Lotus Flower and Moon Upon a Stick were also performed to the delight of the crowd, while the band’s B-side from 2003, Paperbag Writer, was dedicated to another member, Colin Greenwood, who was sitting quietly – and patiently – in the auditorium.

Naysayers would often say there is a something of the ‘Emperor’s new clothes’ when it comes to whatever musical undertakings Yorke, or Radiohead, choose to pursue. This latest sideline gig is sure to be no different, but when you can pull off something like this – after only three weeks of rehearsals, it must be noted – there isn’t much you can say against it.