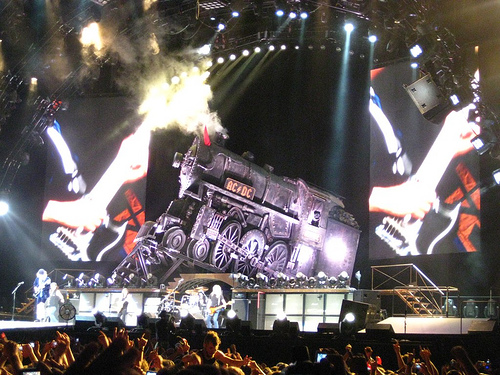 It was a sweet day when we decided to go in Barcelona to see the Australian living legends. So, along with game master Tibi Puiu, a few friends and a handful of whisky and tequila bottles we head out for Spain’s cultural capital. We tried to visit as much as possible there, so we missed about 15 minutes from the opening band’s show, The Answer. There was also a Spanish band before them, but I couldn’t find out much about them. 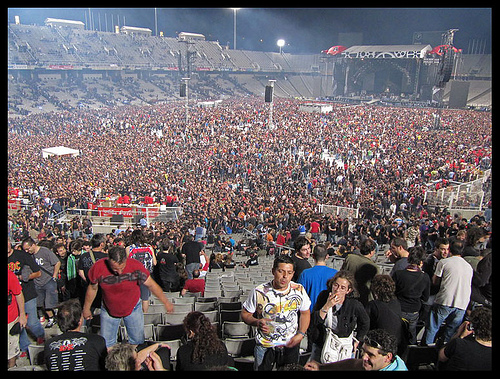 The Answer are definitely a band worthy of opening for AC/DC, but it seemed to me that they weren’t able to get the crowd going and I dunno, maybe they were a bit tired or something, they just didn’t click and I’m guessing the 10.000 people that were rolling joints during the opening act probably agree with me As for us, we were busy recovering from the heart attack we had when we found out that a beer costs 10 euro (~13$).

AC/DC never had any sort of problems getting it on with any sort of crowds, no matter the size, and the 60 something thousand people were ecstatic even before Angus and the boys came up on stage. I have to say, the crowd was just amazing, and everything was set. First, there was a moment of silence, the quiet before the storm; and then, all hell broke loose announcing what was perhaps the loudest concert of the year, starting with the huge train that tore the stage and set the mood for the opener: Rock ‘N’ Roll Train. Brian Johnson came singing from outta hell while Angus Young delivered his meatty blazing solos, everything being pushed even further by the other guys. Seems everybody got a chance to get a look at the new album or at least at the video, because the crowd was chanting like crazy. After the song was done, everybody was magically transported into their vibrant world.When we came back to our senses, things were getting hotter. 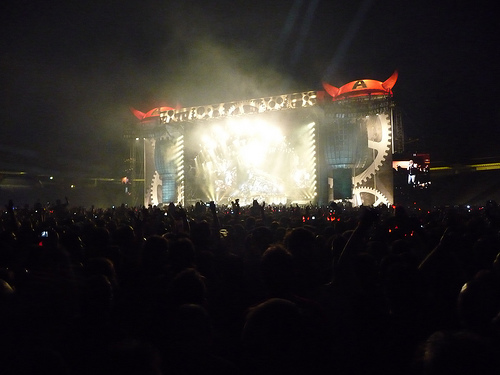 Of course, Hell ain’t a bad place to be, especially if AC/DC are there, but hey, Barcelona’s even better. That’s kind of what Brian Johnson said, before letting it rip, accompanied by a triangle made of Malcolm Young, Phil Rudd and Cliff Williams. As explosions blast and Angus is already going frantic on the stage, the drums for the next song begin and everything just dynamites as the people understand Back in Black is next. At this point, I feel my lungs are breaking down; I look at the Swiss boys beside us and they’re literally flying somewhere above and yes, AC/DC is back. After that you get a newbie from Black Ice, “Big Jack” , and again, almost everybody is singing along. What’s even better is that the songs are built in such a way that you can easily pick up after the first chorus, and they’re so catchy you just have to jump and scream your ass off. 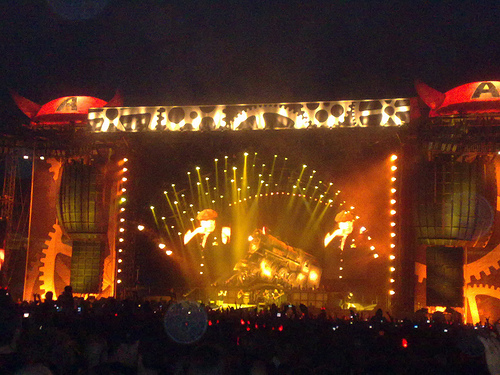 After that, it’s back to the roots with Dirty Deeds Done Dirt Cheap and… Thunderstruck. Yeah baby, they still got it. The only difference now is that their hair is greyer and … well… not as abundant as it used to be. But the skill – never better. By the time they were singing Black Ice the explosion was still active, but seemed to have reduced its proportions, and that’s just unacceptable for them. So it all came down to one of my favorite concert songs and absolute crowdraisers, The Jack. Again, everybody was going nuts in this electrifying eardrum shattering experience which emphasized on one of their favorite themes: chicks. With every 2-3 ‘She’s got the Jack‘, the big screens would show some tasty chick from the audience, and of course, they loved it. But there had to be more; there always has to be more. Angus started to undress, the crowd picked up quickly and encouraged him. After he was only in his trademark shorts, he pointed those were coming off too, all in the background guitar, bass and drum riff that made it exciting. So after the big move, we found out: Angus Young wears AC/DC underpants.

It ended when a huge bell came down to the stage, and pour les connoisseurs, the signs were obvious. By the time Brian Johnson jumped on to the rope of the bell and went left and right like Tarzan, everyone knew Hells Bells is up. After that, the emphasis came on airplanes, explosions and cannons with Shoot to Thrill and War Machine, and after Anything Goes and You Shook Me All Night Long played, the BOOM was topped with TNT. 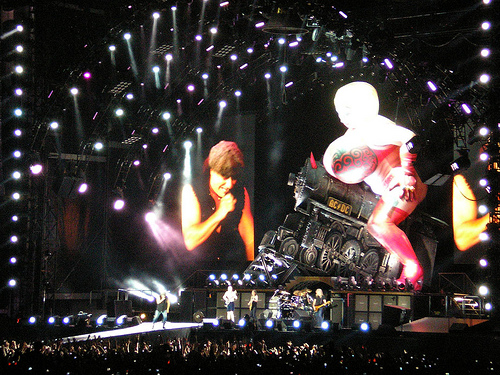 When it was high time for Rosie, this mother of all huge balloon dolls came up and rode the train like it was a motorcycle, tapping the rhythm with a leg, and with her boobs bouncing all over the place. Yeah, Whole Lotta Rosie, that’s for sure, but we love her for that. Finally… Let There Be Rock. 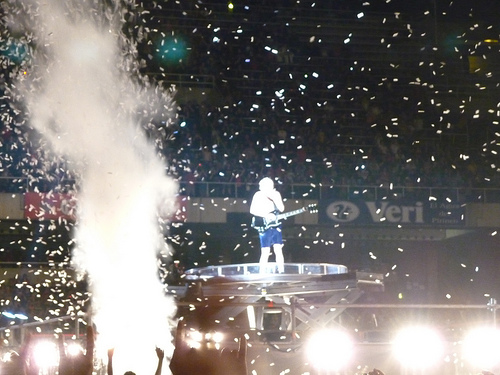 By this point, Angus already unleashed several blazing solos and stole most of the attention, but he just had to top if off, so by using (probably) a stage ramp that somehow led magic, he appeared in the middle of the crowd, right next to us, on a camera platform, continuing to deliver hit after hit making everything even crazier than it was (although that seemed impossible). By the time he almost finished with his solos confetti popped out and covered the entire stadium and Brian Johnson said a small goodbye, but no one minded him, because it couldn’t be over. Everybody knew that. 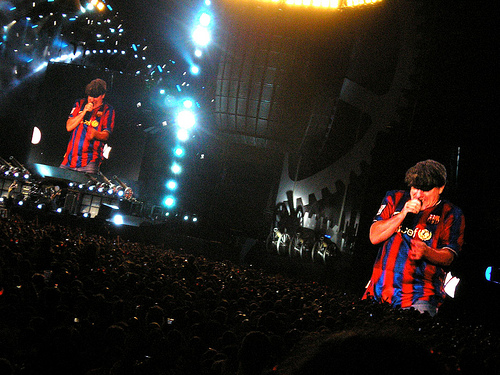 So dressed in a Barcelona shirt (perhaps not such a wise thing to do, when on the stadium of rival Espanyol), Johnson went for the encore. Yes, we’re on a Highway to Hell, no doubt about that but I was thinking, it’s just not complete, the most important piece of the puzzle is missing, it’s just not right. Fortunately, so was AC/DC. Because the best was yet to come. No other song could do an ending of a concert more justice than For Those About To Rock; and the six cannons placed on the scene that fired whenever needed underlined that even more. The evening was complete, with no better way to top it off.

Despite being a bit shorter than 2 hours, the show was ridiculously amazing, the energy that the band managed to transmit to the crowd was just neverending, and each member must have lost 2 kilos. Angus must have lost at least 5, with the whole scene that seems to be made for him, albeit a bit small. There have been some rumours that this will be the last tour, so if you still have a chance to see them – don’t waste it. It’ll rock your pants off.