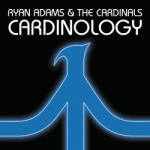 From my point of view, it’s a big shame that Ryan Adams has been in the spotlight due to his drug related problems and mental meltdowns and tantrums than for artistic reasons. But if he had a chance to release an album that would rise him above his current level, Cardinology would be the name of the album. His 10th release (4th with Cardinals, and last with Lost Highway) is more than just a follow up to Easy Tiger from a significant number of reasons. Even David Letterman bowed in front of the brilliant songwriter.

Ryan Adams always seemed not to reach his full potential, perhaps because he was just rushing things too hard, or perhaps he just didn’t want to go that extra mile, but one thing’s for sure. Despite releasing tons and tons of great songs, he always gave the feeling that there’s way more behind his locker. This might just be the best thing he’s ever done, and it’s filled with aromas of feelings and a firm grasp of musical understanding that blend together in what can only be called one of the greatest albums delivered this year. Listening to it makes it clear that he absorbed many musical influences, such as Neil Young, Eagles or Elton John without letting go of his past, especially with Whiskeytown. Folks, we’re dealing with a classic here.

As with most country albums, the whole is bigger than the sum of the parts, because no tracks really stand out, but all of them just take you into a world where it’s better if you’re trying to relax, drunk, or even better, both. It opens up with “Born Into a Light”, which showcases the musical genius able to deliver messy acoustic riff after riff and clothe them with a silky wave of musicality. “Go Easy” is your song filled with rock hooks, while the single, “Fix It”, gives a bit of R&B feel. Magick is perhaps the best tune here, a classic alternative garage rock that just blows your mind, with some really clever lyrics hidden, disguising what is a really apocalyptic view. Then it chills down a bit, and just gets in the feel, and it just can’t be described in words. Just “Evergreen” , a marvelous ballad is worth mentioning.

The thing is that you just have to admire the work of Ryan Adams; this is the same man that created punk and heavy metal tunes. It’s not my job to comment his personal life, but it seems that he finally managed to get his shit

things together and get to a place of productivity and inspiration. Hope this keeps going for him, as it works for us.