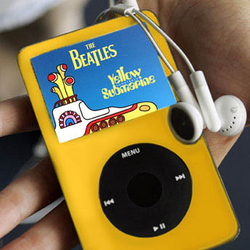 Rumors have sprung up around Apple that they’ll soon release a Yellow Submarinish iPod, with a cool yellow theme, packed with all the 12 Beatles albums ever to be released. It’s been done before and with great succes, like the U2 iPod pre-loaded with U2 music.

CDs lose more and more ground each day, while other storage small gadgets like memory sticks fluoresce, even in the music business, i.e. the Icky Thump Stick. iPods are no different, i predict in the future albums will be sold as pre-loaded iPods, at todays record prices, being more practical and over all cool. I only hope this special yellow-submarine release gets on the market sooner, as i’m sure it will some day.