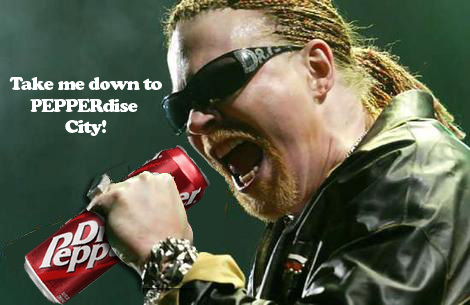 I knew Axl and his lot were outrageous from the start, but this latest stunt is really weird, not to say stupid – the type of thing Prince would be proud of.

Ok, remember the Dr. Pepper ad that stated if Chinese Democracy would finally get released in 2008, then the company would give out a can of Dr. Pepper to every American citizen (apart from Slash and Buckethead, of course)? Well, this week, on November 23rd Chinse Democracy indeed got out and Dr. Pepper put out a feature, down at their website, allowing US visitors to receive a coupon for a free can of soda. Problem is, on the release day, the website crashed and Axl’s people saw this as a total ‘publicity fiasco,’ buy it allegedly ruined the far saught release date.

“Tthe redemption scheme your company clumsily implemented for this offer was an unmitigated disaster which defrauded consumers and, in the eyes of vocal fans, ‘ruined’ the day of Chinese Democracy’s release”.

“As we all now know, Dr. Pepper created an expansive and highly-publicized advertising campaign based solely on the exploitation of my cleints’ legendary reputation. In and of itself this campaign brazenly violated our clients’ rights in numerous respects. Unfortunately, Dr. Pepper has now magnified the damage this campaign has caused through its appalling failure to make good on a promise it made to the American public.”

The letter continues with other boring bla, blas until it hits the best part:

If that isn’t retarded, I don’t know what retarded is.