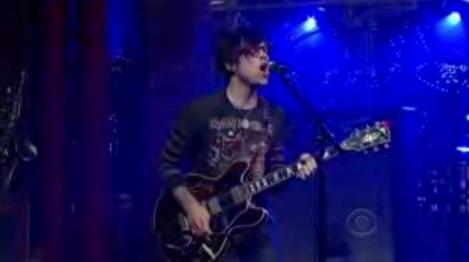 Ryan Adams latest, tenth album, recorded with his long time collaborators The Cardinals, titled “Cardinology“, got out on shelves of record stores all over the country this week. It’s quite incredible how Ryan manages to spit out records after records in such a short time span. Sincerely, he would put most other songwriters to shame, but, like I’ve already said it before, I feel like he’s rushing things too much. This leads to half-baked stuff.

Of course, not all of his work is under-produced or rush, like his latest single “Fix It,” off Cardinology, a very soothing, catchy song. Actually, Ryan and the gang stopped by Letterman’s Late Night Show the other day and offered an awesome performance of the song. Check the video out bellow and be sure to check out Ryan Adams’ t-shirt. You’ll find that he’s being very ‘ironic.’