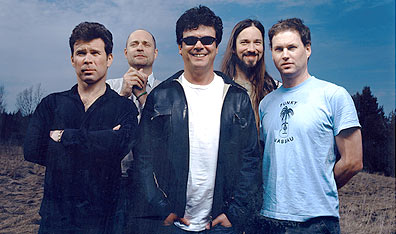 They have been together for almost 25 years, yet very little about them has changed. The big boys from Kingston, Ont., are very much the same. They have sold many copies of their most recent CD, World Container in Canada but outside the border they have not experienced the same success.

There is breakup on the horizon. They are just the same old Tragically Hip, and guitarist Paul Langlois says they couldn’t be happier about that. “It’s a good thing for this band that we still feel like we have something to prove. He also sais that “That hunger to achieve more and create more is still there and I think that’s why we are still together. And it probably helps that there has been some focus on our perceived lack of success in America, even though we do feel quite successful down there on our own terms. It’s a very slow build, but the word is spreading,”.

They have sold more than six-million albums worldwide, won a dozen Junos and were inducted into the Canadian Music Hall of Fame in 2005. They have a gig in Saddledome for their first local show since a handful of small concerts. It may be strange for a band to play to such an audience when they could fill an arena but Langlois says it’s simply to ward off boredom. “It was just a matter of changing it up, keeping it different all the time and maybe to keep people guessing. We like the big shows and we like the small shows. What we don’t like is monotony.”

Thay may just be why they do not script their live shows. Every night the set list is switched and the in-between song banter is off-the-cuff. “It’s something we are proud of, but that’s not why we do it — it’s just to keep us on our toes. The set list, Gordie (Downie) and Gord (Sinclair) write it up usually a couple hours before we go on — it’s pretty rare there would be any heated debates on these creative things. The fact that the usual marketing loses every now and then to the musical natural touch is nice to notice