Ok this has to be the game of the year, seriously, its brilliant. What am i talking about? I’m talking about Rock Band, it’s basically a multi-player Guitar Hero game, developed by the same producers (Harmonix) distributed by MTV Games.

Yesterday it was unveiled to the world, at the E3 video games conference, were it produced massive positive reactions, including my own. I mean the developers have struck gold, it’s unique, as a concept/idea, its fun as hell, it’s overall awesome.

If your familiar with Guitar Hero, you won’t find any problems playing Rock Band, the difference is that, while in Guitar Hero you could only play lead guitar, now you can play two guitars ( lead and bass), a drum kit and a microphone. You can jam with your buddies as a band, each picking an plastic controller (instrument) and covering some of the modern age rock classics. Each controller is impressively well represented and helps as much as it can to create a band-like atmosphere; the trick to the game is that each user has to push a series of buttons ( there are 4 buttons in total) on his controller, according to the ever changing symbols displayed on the screen. 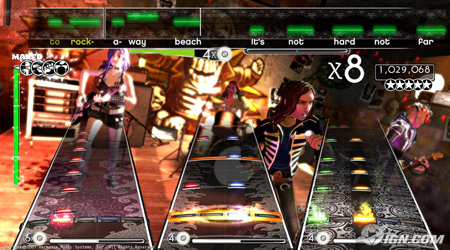 A screenshot from the game. Each instrument is represented by a different interface: lead guitar (left), drums (middle), bass/rhythm guitar (right), vocals (top)

A cool feature that has been implemented is online play, besides the obvious “local” multi-player with your buds on the same Xbox, you play on the internet, so you can play your guitar from the comfort of your livingroom, while you jam with your friends from France and Germany.

The collaboration with MTV is extremely important, as they secure an awesome soundtrack by original artists ( not cover bands, like most karaoke games do). “This game offers a meaningful way for labels to participate in a segment of entertainment they, for the most part, have not been able to,” MTV’s Jeff Yapp says. Names like Black Sabbath, David Bowie, Foo Fighters or The Hives have already been added to the setlist wannabe-bands can play. Additionally the producers announce that after the game will be released, from November 1st in North America on Xbox 360 and PS3 only, new tracks will be available to download every week and be ready to cover with your “band”, also you’ll be able to download albums too, [tag]Metallica[/tag]’s “Enter Sandman” will be amongst the full length albums you’ll be able to get.

Dudes, this will be huge!