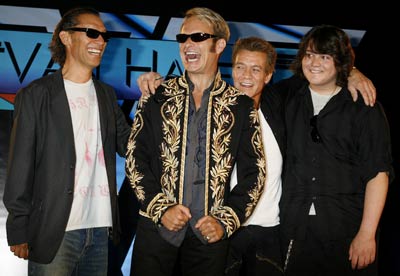 In late September the rock ‘n’ stage was pleasantly surprised when, one of the most popular rock bands of the 80’s, [tag]Van Halen[/tag] announced they would reform under the firm lead of David Lee Roth and start a world tour. Thus Roth, Eddie and Alex Van Halen and Eddie Van Halen’s teenage son Wolfgang on bass, kicked off Sept. 27 in Charlotte, N.C., with 40 dates in place. Although a lot of skepticism was in the air, regarding the band’s capabilities and over all “do they still got it?!” sentiment. But they soon became live favorites for fans and critics alike.

They proved to everyone that they’re in top form, so it was clear that Van Halen were going to announce a tour extension. The news turned public a few days ago, with five additional dates added: Oklahoma City (Jan. 22); Houston (Jan. 28); Omaha, Neb. (Feb. 4); Ft. Lauderdale, Fla. (Feb. 12); and St. Louis (March 30), according to the band’s official site. Bellow you can find their remainder of dates as well: