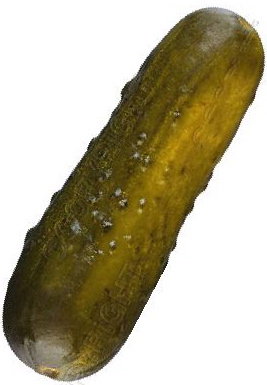 I’ve given Nickelback a lot of shit for its continued existence since I started writing for ZME last year. That said, I’m not sure that I can top a Facebook group called “Can this pickle get more fans than Nickleback?” Yes, the band’s name is mispelled, as the author of the group admits:

I am fully aware that I misspelled Nickelback as “Nickleback” in the name of the page. This is because Facebook doesn’t allow you to put the word Nickelback in the name of a page because I guess if someone did it would be copyright infringement.

Anyhow, the group was created in order to see if an ordinary dill pickle can amass more (supposed) fans than the band has on Facebook. As of this writing, Nickelback has 1.39 million to the pickle’s 916,676. What’s most amazing about the latter number is that the group was formed on February 3 of this year. That’s some serious grassroots campaigning, I must say. Whether or not the pictured dill pickle can overcome the 500,000 fans it needs to win is debatable, but at the current rate, it should only take about five more days or so.