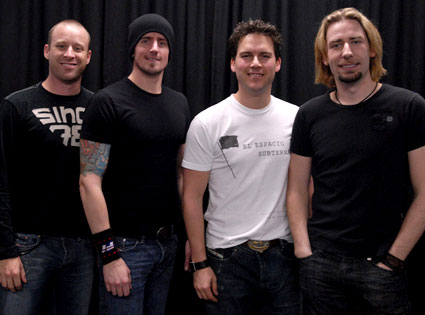 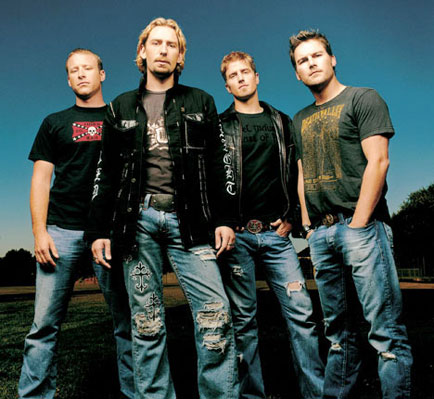 Even as I include the following qualification to this piece, it’ll still probably be misinterpreted. Nickelback is a terrible band, OK. I get it. They’re the band everyone points to when discussing all that’s wrong with modern music, specifically rock. Yes, Chad sounds like the bastard child of a rather violent hate-fuck orgy including Eddie Vedder, Scott Weiland and Scott Stapp. Yes, none of the band members are particularly talented musicians, save former drummer Ryan Vikedal who occasionally did double kick-drums (or used triggers).  They’re the pinnacle of shit. They’re the best of the worst. They’re antithetical to quality. Their continued success is proof that the Devil exists, or that God hates us. I could go on.

But, damn are they a hit-making machine. They’re a rock band that has multi-platinum records during an era in which gold is considered diamond. Besides Coldplay and U2, who else has this kind of success, and this consistently? This just isn’t supposed to happen to a band like Nickelback. Post-grunge is dead and its biggest entity, Creed, was DOA during the band’s entire ascension to the throne, making the reality of it that much more impressive (read: depressing). The only explanation is the the series of (undeniable) hits over the last eight years. Shake your head and roll your eyes all you want, but admit it: even as you read this, there’s a Nickelback single stuck in your head. And if there wasn’t before, that last sentence did it. Maybe it’s “How You Remind Me.” Perhaps “Photograph.” Which ever single it is, it’s fucking catchy and you damn well better accept it. And they’re sticky songs because of the (kinda brilliant) melodies that exist within these hits. Nickelback melodies aren’t complicated or intelligent by any standard of comparison (hell, neither are the lyrics) but they are memorable. And that’s the key: the melodies don’t have to be complex in order to stick in your head. It’s as if the Chad and his merry band of half-wits are a bizarre, four-headed land-monster  King Midas clusterfuck of the music world.

Hate the band all you want, but even I have to acquiesce that Nickelback as a business has made every right move. The band’s put out best-selling records that include multiple hits across multiple radio formats, recorded with some great producers and even Mutt Lange, and toured everywhere fans buy its albums. It’s avoided just about every possible mistake by, simply stated, keeping to what works – to a fault. Nickelback has never put out the experimental or arty record, or the acoustic album for that matter. Nope, every single (successful) album contains the same elements: a big, dumb, hard rocking single (“Animals,” “Something in Your Mouth“), an acoustic-driven rocker that usually follows or precedes the rocker (“Photograph,” “Rockstar“), and two or three throwaways that somehow still garner substantial airplay (“Figured You Out,” “Side of a Bullet“).

In addition, Nickelback’s catalogue of hits is basically comprised of universal themes: sex, drugs, rock ‘n’ roll, family issues, etc. So, even if you loathe the music, you can at least take solace – albeit, a rather miniscule amount – in Chad’s words. Well, probably. Take “Animals,” for example. It’s about fucking in a car and then being caught by the girl’s dad. Who hasn’t either had part of that or all of it happen to them? Backseat joy is a pervasive theme for teenagers. Lyrically (and musically) it’s really, really dumb fun. Emphasis on the dumb. Or how about “Too Bad,” a song discussing a broken family due to an absent father. With the statistic that Chris Titus cited during his one-man show all those years, this particular single must also be damn near omnipresent. “Rockstar,” of course, is a satirical take on the excess(es) of the rock lifestyle. Breakups? “How You Remind Me” and “Someday.” Incidentally, the pair of songs are both similar in lyrical focus and, well, everything else. Drugs? “Leader of Men.” And they’ve even gone beyond the universal, or at least they used to. “Never Again” is an anti-domestic violence anthem. Then there’s the quasi-philosophical songs from the early days: “Breathe” is probably about something important, though exactly what is hard to pinpoint. Even with the few obscure themes, Chad and company try to keep it all-inclusive for maximum (radio) impact. As Evan Dickson eloquently put it:

Chad Kroeger is a genius because he knows exactly what people want and precisely how far he can go. He turned out an extremely racy album [Dark Horse] that’s loaded with songs about gettin’ drunk and doin’ it all without breaking any taboos, and with enough love and moral authority to grease its passage into the mainstream. Rejoice, North America. This is your world. [emphasis added]

Even with the production side of their music the band’s gotten better from album to album. Their early albums, Curb and The State, were rather thin sonically, lacking any real punch of successive collections. Then came Silver Side Up, which was the first in the upward trend of arena-sounding records. While still thin, the guitars were thicker but sounded as if they were recorded in a tunnel, the bass was pushed up in the mix and drums were powerful despite being buried in the mix. It’s with Silver that the band started to work with big-league producers. Silver featured famed grunge and post-grunge icon Rick Parashar who’s worked with Pearl Jam’s Ten and Temple of the Dog’s eponymous album. Follow-up album The Long Road finds the band finally taking control of its sound. Sure, Joey Moi has a co-credit, but this is the start of self-control to be sure. Coincidence? If it’s more than that, nobody will admit it. Road‘s mix is vastly improved over Silver: beautifully mulit-tracked guitars that are seriously chunky, bass that’s audible and thick but not dominating and drums moved up in the mix that hit hard. Then came All The Right Reasons where the band essentially made a (near-) perfect sounding modern rock record. The mix is not only Hysteria-level  impenetrable, but clear and, most importantly, not audio-clipped. Finally, we arrive at what is the band’s aural zenith known as Dark Horse. The reason, of course, is “Mutt” Lange. He took the Reasons mix and just made it…better. He gave the songs a crispness that wasn’t there before. The guitars gained brightness they didn’t necessarily need but still was a splendid addition. The bass, duh, was made more audible and denser, resembling Brendan O’Brien’s work. And those drums? Holy hell, they knock shit loose in your head. It’s simply wonderful. Nickelback’s next album might actually run the risk of death if played. Take that as a compliment or a joke, depending on your sensibilities.

Let’s be clear about one thing: Nickelback is not the worst thing in music. There are a manifold of artists that are worse – like this and this. Hell, even the proliferation of Auto-tune is worst than Nickelback by at least a few orders of magnitude. That said, Nickelback are not a good in a critical sense. Yes, they can churn out hit after hit with an implausible consistency, but that doesn’t make them a great band. Chad’s voice is horrifyingly grating, post-grunge is (still) as much of a scene-genre as screamo-crunk and, honestly, their albums are padded with filler. But that’s not the real point here. The point is that Nickelback, while a terrible plague on the world, are actually talented insomuch as there’s actual songwriting with addictive hooks album after album And they did it without T-Pain, something everyone should get behind. America owes Nickelback a ‘thank you’ just for that.