So, for all the shit that I’ve given Nickelback over the years, apparently it has been warranted – at least a little bit.  A blog calling itself Tastebuds.fm has named the Canadian rockers the “number one musical turnoff.”

Tastebuds, a similar site to Last.fm, did their research thusly:

Each user was allowed to specify up to 12 acts that turned them off. Nickelback – regularly lambasted by the music press – came out on top with almost 13% of users specifying their brand of grunge rock as a turnoff.

Now, granted, 13% isn’t a high number, but it still represents the most votes by the 1632 Tastebuds users taken between July and October of this year.  The breakdown of the top ten is seen below.

There is more.  On a comparison between women’s and men’s turnoffs, the former found female acts such as Rihanna, Ke$ha, and Taylor Swift repulsive, while the latter was more male-centric including Kanye, Dave Matthews Band and Oasis.  Here is the male/female comparison breakdown: 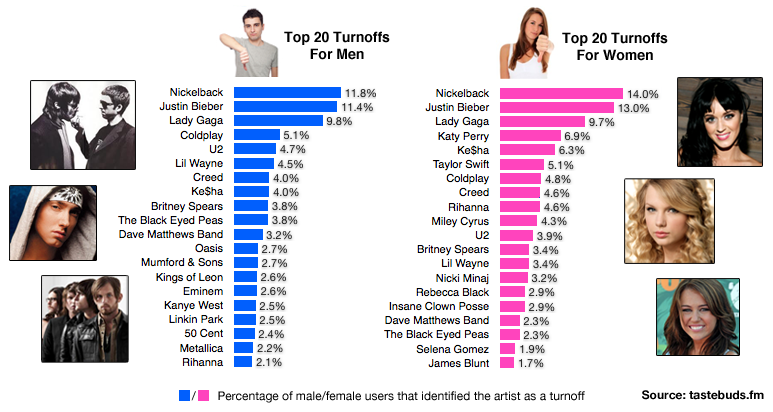 For a while there I wondered if I was being too hard on Nickelback.  Guess not.