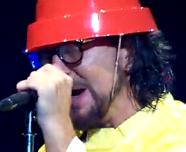 Partying and ridiculously awesome music (and a LOT of alcohol) can make Halloween a tolerable experience, in an atmosphere dominated by lame costumes and pathetic pranks. This weekend, some lucky concert goers were met with a few surprise appearances by their favorite bands in some peculiar formats.

At The Ryman, my favorite bluegrass ensemble played the them song of the cult classic ¡Three Amigos!, with the necessary props to go with it too – dressed up in mariachis like the movie’s protagonists (Chevy Chase Steve Martin and Martin Short). Although the moment was terribly too short, it simply made my day!

In Louisville, one of the best collective side project of the year, Monsters of Folk went all crazy on stage, stepping out of the curtains costumed as KISS members, before delivering a very faithful cover of “Detroit Rock City”.

Then equally came the most badass/hilarious Pearl Jam performance I’ve yet to see, when Eddie Vedder and the rest of the band came up the Philly stage dressed like Devo. What I loved the most about the gig, apart from their great cover of Devo’s 1980 hit single “Whip It”, was the fact that they went all the way with their show, going as far as even mimicking Devo’s notorious robotic like stage presence.